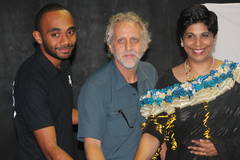 Former High Court judge and Fiji Goodwill Ambassador for Women Nazhat Shameem, who was the keynote speaker, launched the news site at the closing cocktails, which was held at USP’s Oceania Centre’s Performance Pavilion.

“This is an excellent opportunity for student journalists to work in an online news forum and gain valuable experience that will make them more employable in the media industry,” he said.

Wansolwara Online Editor Biutoka Kacimaiwai said the response from the public so far had been good, with people commending the website for its look and accessibility.

“The response has been really positive, students and other people have been really impressed with the new clean and user-friendly look,” he said.

Kacimaiwai said the aim was to make wansolwara.org more interactive and to create an online forum where students could talk about issues that affected them.

“We are hoping to add polls and comments with articles so that the news is not only read, but also discussed,” he said.

Kacimaiwai said the next step would be to find ways to integrate it with the USP radio station, Radio Pasifik, and also with television production material produced by students.

“We are hoping to improve the site as it has just been launched, and by next semester students in USP, Fiji and the region would be able to look to Wansolwara online publications to get updates about what’s happening around them,” he said.