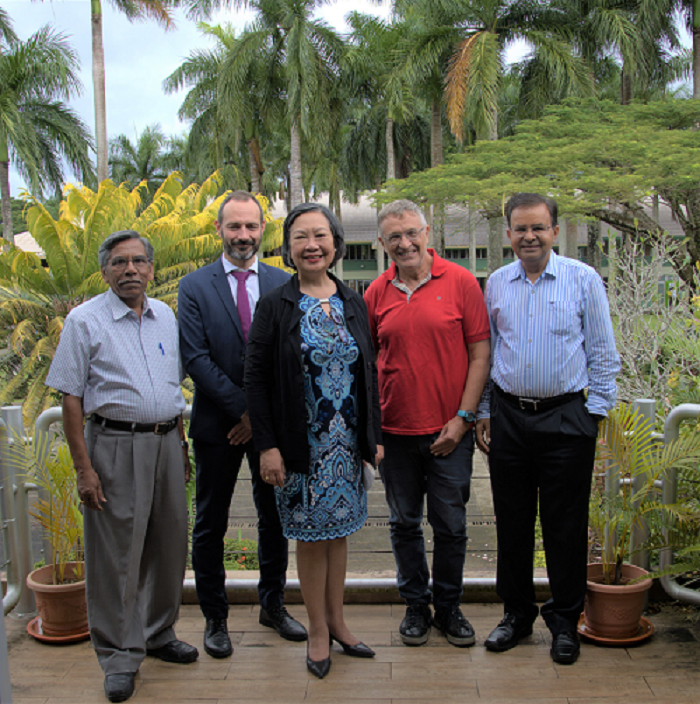 Discussions were initiated following a recent courtesy visit to the USP Laucala Campus by IAEA Director and Head of Technical Cooperation in Asia and the Pacific, Ms Jane Gerardo-Abaya, and Project Manager Officer to Fiji and the Pacific, Mr Javier Romero.

Professor Kumar thanked the delegates for their willingness to support the region.

He added USP recognised the detrimental effects of microplastics on marine ecosystems, an area in which it conducted research and offered programmes.

Microplastics (MPs) were identified in the waters of Fiji and were absorbed through seafood, according to a recent study funded by the Pacific-European Union Marine Partnership (PEUMP) Programme.

Professor Prasad said USP was willing to collaborate in similar research and looked into combining physics and marine science research, especially using nuclear techniques for research on NUTEC plastics with the support of the IAEA.

Ms Gerardo-Abaya highlighted that IAEA was at the forefront of deploying nuclear science and technology to address global challenges, including plastic pollution.

“Nuclear techniques can help recycle plastic through radiation techniques in the region and we would like to know more on how we can cooperate,” she said.

Ms Gerardo-Abaya added that IAEA had launched a project to monitor microplastics’ movements and accumulation where academic institutions like USP could contribute.

According to IAEA, NUTEC Plastics enhanced the capability of laboratories to study the impacts of plastic pollution in coastal and marine ecosystems by utilising nuclear methods to precisely track and quantify the movement and effects of microplastics and co-contaminants. Nuclear technology also offered solutions to lower the volumes of plastic waste.