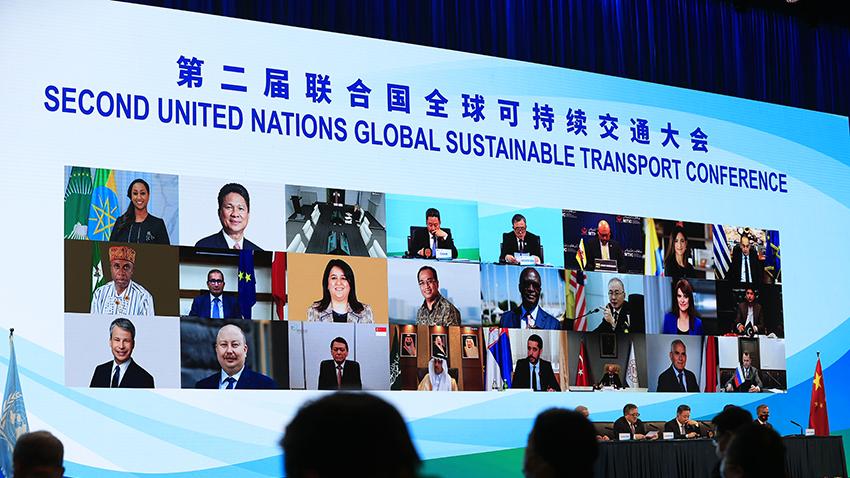 This was presented by MCST Scientific and Technical Advisor Dr. Peter Nuttall at the UN Conference Thematic Session 4: “Sustainable Transport and Green Development: Climate Change Mitigation, Adaptation and Resilience”. The Conference was co-hosted by China’s President Xi Jinping and the UN Secretary General António Guterres and was attended by more than 1000 delegates from over 100 countries.

MCST was established by The University of the South Pacific and the Republic of Marshall Islands (RMI) as the primary institution for achieving RMI’s Transport Nationally-Determined Contributions (NDCs) targets and as a catalyst for regional transition.

The RMI and Solomon Islands proposed a universal Greenhouse Gas levy on all international shipping with a floor price of $100/ton to meet the price differential with alternative technologies and fuels.

“Such a levy will have minimal impact on transport costs in the vast majority of cases. It will certainly have less impact than the current market forces, seeing costs spiral in the past months. Less impact than fluctuations in oil prices. Less impact than 3 degrees and it’s fully in line with what progressive industry is calling fo,” Dr. Nuttall said.

“We are insisting on a just transition.  We have a unique opportunity to drive real change that benefits all states and the climate. But that is going to require real resourcing.”

He said of the proposals on the table, only the Pacific levy addresses the scope of revenue needed – north of $1 trillion between 2025 and 2050.

Dr. Nuttall added that Kiribati, Marshall and Solomon Islands, have also taken action and are right now asking all 174 Member States of the IMO to endorse a resolution immediately setting a new emissions target for international shipping.

Dr. Nuttall called on the IMO to confirm its position and support the commitments taken by the island nations.

“The science is clear; this is the minimum needed to keep 1.5 degrees on the table.  Given the IPCC‘s Code Red, the least the IMO can do is confirm to the rest of the global family that it is fully on board,” he said.

The MCST is a unique program and approach to addressing the need for Pacific states to transition to low carbon transport pathways.

The MCST Framework sets out a structured fifteen-year program to achieve this by first aiming to achieve such transition in one country, the Marshall Islands and then using this as a catalyst to cascade successful results to neighboring states and outward through the region.

RMI is the first Pacific Island Country to set an unconditional NDC target for national transport emissions reduction (16% by 2025 and 27% by 2030).

Ahead of the 26th UN Climate Change Conference of the Parties (COP26) in Glasgow on 31 October – 12 November 2021, the UN aims to raise a transport revolution that can help tackle the climate emergency. With the transport sector contributing approximately 25% of all direct greenhouse gas emissions, there is a renewed sense of urgency for achieving sustainable transport globally–transport that is safe, green, efficient and accessible.

The Sustainable Transport Conference was an opportunity to highlight concrete solutions for developing transport systems that will effectively respond to the climate crisis.

UN Secretary-General, Mr. António Guterres, said there was a need to accelerate the decarbonisation of the entire transport sector.

He added while member states have made some initial steps through the International Civil Aviation Organization (ICAO) and the IMO to address emissions from shipping and aviation, current commitments are not aligned with the 1.5-degree goal of the Paris Agreement.

“They are more consistent with warming way above 3 degrees,” he said.

“Adopting a new set of more ambitious and credible targets that are truly consistent with the goals of the Paris Agreement must be an urgent priority for both these bodies in the months and years ahead.”

“Overall, the conference confirmed that much of the research and programming we have done since 2015 is fully in line with the best in global thinking and our prediction then that transport decarbonisation would become a major global priority focus was correct,” he added.