New Biofuel Laboratory, a boost to the region’s energy sector 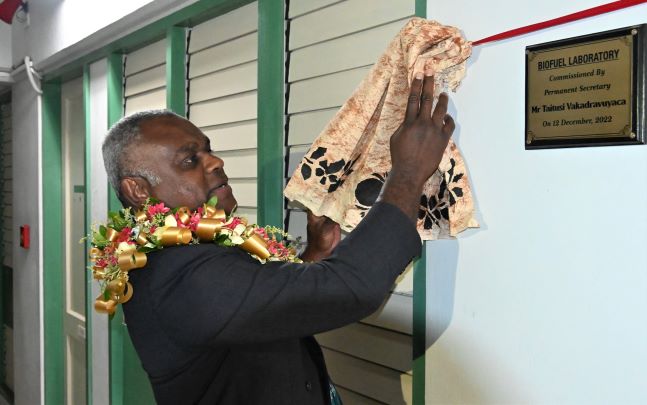 A new accredited Biofuel Laboratory at The University of the South Pacific (USP) in Suva will boost Fiji and the region’s energy sector.

The laboratory which is situated with the Institute of Applied Sciences at USP’s lower campus is fully operational, thanks to the strong partnership and collaboration between the Fijian Government and the institution where an estimated $2.8 million was invested into the initiative, to test at least 38 biofuel properties specifically for ethanol and biodiesel.

USP Institute of Applied Science Acting Director, Dr Isoa Korovulavula said the new lab would generate opportunities in Fiji and the region to use natural resources in the form of biofuel and a few academics as well as students have written papers and carried out extensive research about the initiative.

Dr Korovulavula stressed that there was still a lot of work that needed to be done to ensure this new approach or initiative is sustainable.

“We have to create awareness and probably businesses or individuals that are interested can bring in whatever they want to sample and to find out the property they have in terms of potential biofuel commercial properties that can be put out to the market,” he said.

He added this new biofuel laboratory was a first of its kind in the Pacific and is optimistic that research and other energy tests conducted would positively impact small island nations and raise our profile and standing.

“Fiji is the only country which has a biofuel lab. So, in that aspect, it has a major positive impact on small island nations and raises its profile. Again, only the future will tell, in terms of the positive economic impact of such an initiative. But we have been getting a few students who have done research in different aspects of that which I think is important as part of our work here, not only just facilitating private sector and public partnership, but more so the students here at The University of the South Pacific,” Dr Korovulavula said.

“Fiji through its NDC Implementation Roadmap has committed to walk the path of low-carbon fuel growth by developing and expanding the use of clean energy sources. I wish to reiterate that Fiji intends to reduce its overall contribution to global warming by reducing its carbon emissions by 30 per cent by 2030. Our National Development Plan commits to achieve 18 per cent share of renewable energy sources by 2030 and 100 per cent in the power sector alone by 2036,” he said.

Mr Vakadrvuyaca highlighted that the benefits of this laboratory to Fiji and the region were undeniable.

He said the facility would ensure faster turnaround time for the testing process. He added testing that normally took a few weeks to months could now be conducted within days.

“Fuel companies, regulators and stakeholders will attain faster results, meaning timely control of quality in the fuel industry. The establishment of this lab will also ensure the affordability of fuel testing in Fiji and the region. Fuel companies will have access to affordable fuel testing service at their doorstep throughout the year,” he stressed.

Dr Korovulavula said discussions amongst the Senior Management Team (SMT) would continue to look at ways and means by which the laboratory could fund itself.

He added the SMT would also look at opportunities to maintain the conditions of machines and equipment through income that the laboratory generates rather than getting funds from external parties or other units.