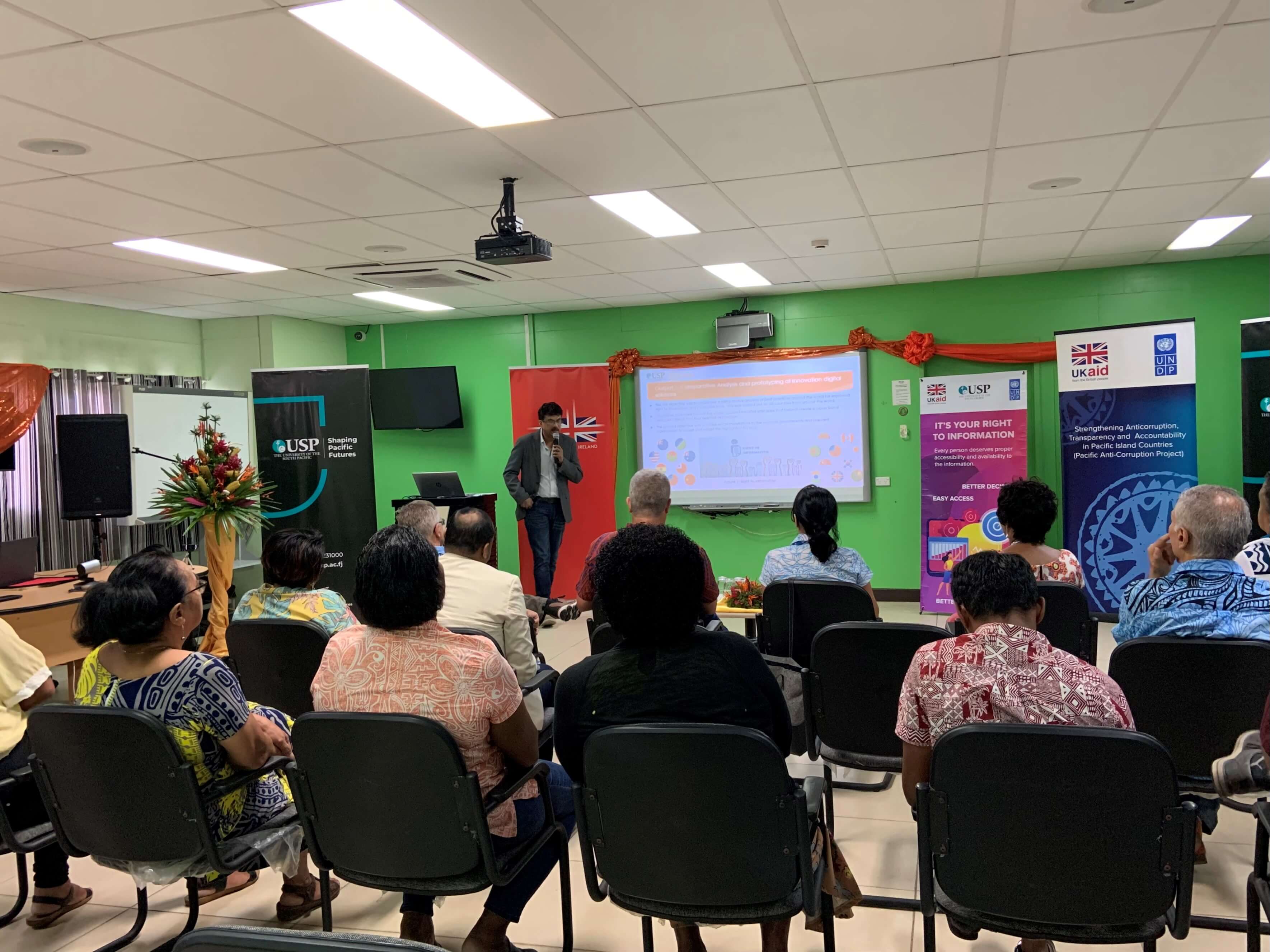 The Right to Information: Citizen Friendly Digital Prototype converged of two student teams with the help of a programming staff member from The University of the South Pacific (USP) showcased their innovative ideas on digital tools for RTI in the Pacific and making information readily accessible and available.

The School of Technology, Engineering, Mathematics and Physics (STEMP), in partnership with the UNDP Pacific Office, proudly showcased their Citizen Friendly Digital Prototype tools for the Right to Information (RTI) project funded by the UK Aid.

At the launch, the two participating teams, ValueMeals and InfoTips, presented their unique digital tool prototypes which were judged on their innovativeness, user-friendliness, and how intuitive their ideas/tools were. The idea/tool needed to be realistic in production and make a regional and global impact in the long run.

USP Deputy Vice-Chancellor and Vice-President Education, Professor Jito Vanualailai, said the University was happy to see this continued partnership with UNDP on RTI, which USP was passionate and concerned about, and heavily committed to. He added the innovative digital prototypes marked the thorough research and survey the USP RTI team had worked towards.

“Each of them has provided insight into what is necessary to achieve better RTI functionality for Food Control and Management in the Pacific,” Professor Vanualailai said.

“Through these innovative prototypes, we hope to empower current and prospective food business owners to participate more fully in public life, improve their information accessibility and contribution to the Pacific economy.”

UNDP Deputy Resident Representative, Yemesrach Workie, thanked USP for the partnership and added the event built on a series of UNDP-supported activities implemented by USP around awareness and advocacy, RTI, and the linkages with the concepts of transparency, accountability, openness, and integrity.

“With all the hard work invested so far by USP and its students, the event is another important milestone of the project to see what ideas have been developed by the students to address some of the information gaps identified throughout their research and analysis,” she said.

“RTI is important in fighting corruption and delivering the efficient, effective, transparent and accountable governance systems that we now need more than ever.”

Ms Workie stressed the importance of digital transformation and innovative digital tools for promoting the right to information agenda and winning the fight against corruption.

“Technology has become one of the most important tools for preventing and tackling corruption. Digitalisation and digital transformations have considerably contributed to public sector reforms; improved efficiency and effectiveness in service delivery; and enhanced transparency, accountability, accessibility, and citizen participation,” she said.

Chief Guest, British Deputy High Commissioner to Fiji, Mr Paul Welsh highlighted that everyone should have the right to access information and that it was critical to a functioning democracy.

“This right should include the freedom to ask for and receive information and ideas of all kinds, regardless of borders, orally, in writing, or print,” he added.

Mr Welsh said the various accessibility requirements for people with disabilities should also be considered and those young people should also be engaged in policy formulation.

“It is crucial to consider young people’s views because different generations will invariably have different ideas of what they are entitled to and what they need regarding information,” he said.

“We will soon start working on creating an online RTI module, putting the newly suggested digital tools into use, as well as elevating the awareness of these advocacy workshops,” he said.