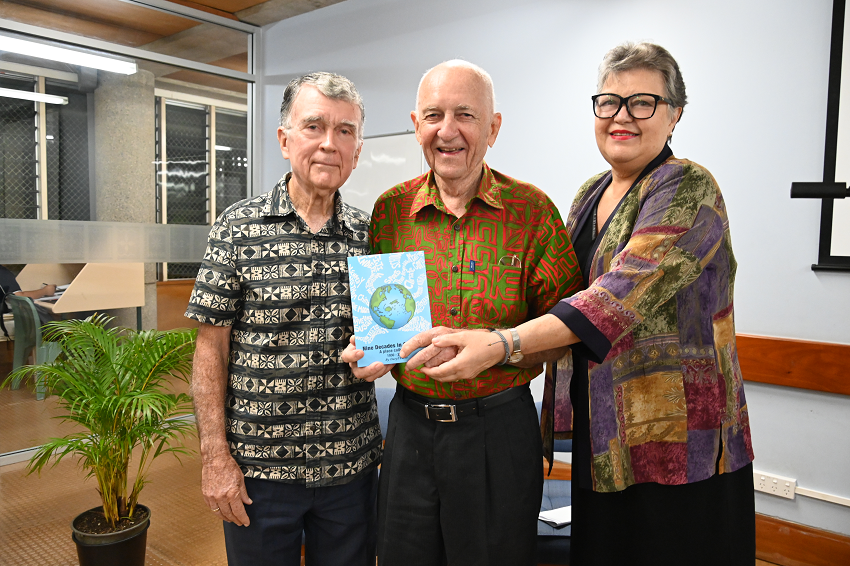 The book focuses on events that occurred in the 1930s and subsequent decades. The book tries to draw connections between global events, Fiji, and where appropriate Mr Tarte’s family. The Tarte family has been a part of the Fiji landscape for six generations since 1868, making Mr Tarte the fourth generation to live in Fiji. It took him around two years to complete the book.

Chair of the USP Press, Ms Elizabeth Fong, welcomed everyone to the launch and shared that the USP Press aims to carry on the goals and work of the former Institute of Pacific Studies (IPS).

“Like IPS, our goal is to become the most well-known academic centre in the USP region. We’ve faced challenges and still have a long way to go, but every great journey starts with a single small step, and the launch is the first step in the right direction,” she added.

“We have made much progress since USP Press was re-established in late 2021″, adding for me to have a very vibrant press is really important”.

She said they were pleased that Mr Tarte considered USP Press as the publisher of his latest book.

In his address, USP Vice-Chancellor and President Professor Pal Ahluwalia expressed his delight and stated that the author is an inspiration to any writer in the Pacific.

“I wish to commend the author for his vision and efforts to record what I consider a deeper analysis of the history of the places and people, as well as greater reflection on events he has lived through nine decades from the place he considers home, Fiji, “he added.

The Vice Chancellor and President acknowledged and thanked Mr Robin Yarrow, a former Chair of the USP Council, for agreeing to launch the book.

Mr Tarte explained why he has written 13 books.

“I suppose for many reasons but primarily because I live in a unique little island nation Fiji which is situated in a unique part of the world, the Pacific, and there are so many memorable experiences and interpretations of events,” he emphasised.

“I realised early on that Fiji has evolved through an unusual political process. As a kingdom, a colony, a dominion, and a republic.”

Mr Tarte said that those of us who have lived through the 20th Century are privileged because it is the most momentous period in human history.

“The discoveries development and knowledge gained are greater than any other period,” he mentioned.

The “Nine Decades In Our World: A Place Called Home 1930 – 2020″ can be purchased from the USP Book Centre as the distributor of USP Press publications.