Home / News and Articles / U.S. Secretary of the Navy delivers a public lecture at USP

U.S. Secretary of the Navy delivers a public lecture at USP 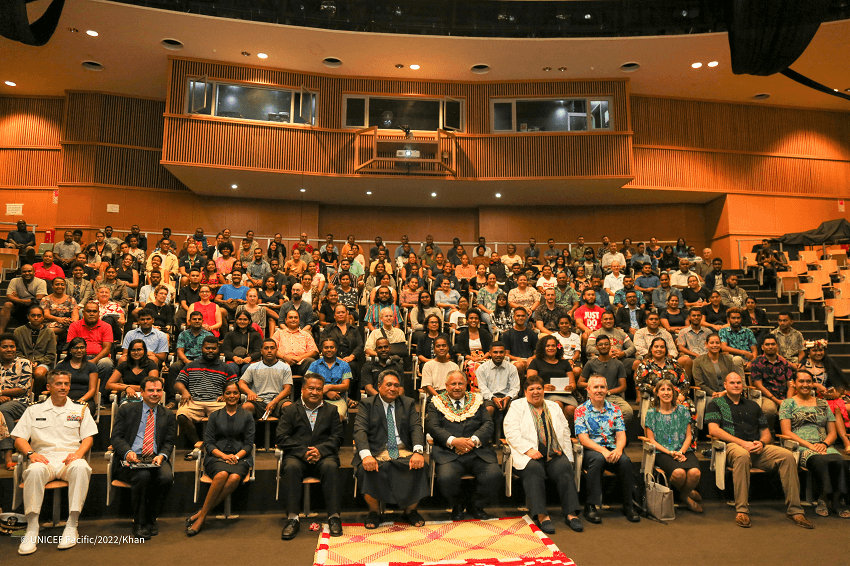 The United States (U.S.) Secretary of the Navy, Carlos Del Toro yesterday, delivered a public lecture to the students, staff and wider community of The University of the South Pacific (USP).

While delivering his lecture to over 300 students and guests who attended virtually and in person at USP’s Laucala Campus in Suva, Hon. Del Toro spoke at length on the resiliency and security related to the existential threat of climate change.

Delivering the welcome remarks, USP Vice-Chancellor and President (VCP), Professor Pal Ahluwalia said it was an honour for the University to host Hon. Del Toro and highlighted USP’s efforts in building the capacity of the region.

“USP is committed and actively engaged towards enhancing the capacity of the region in areas of environment, climate change and ocean resource management where USP has a proud tradition of developing and supporting Climate Action initiatives.”

The VCP added, “Climate change is predominantly the topic of discussion throughout the region and amongst our Pacific Leaders. The Pacific region faces many challenges and Pacific Island countries are perhaps the most vulnerable in the world when it comes to the effects of climate change and natural disasters”.

Hon. Del Toro said, “The U.S. Navy and Marine Corps team has been working on climate and energy security for a very long time. We have recognised the opportunity to harness the enormous size, scale and reach of the U.S. military into every sector of the American economy to drive sustainable innovation across our society. The Department of Defense is positioned better than any other U.S. institution to be a leading agent for change.  We have the ability to not only reduce our own carbon footprint but to also play a critical leadership role in helping reduce the United States’ carbon footprint as a whole.”

He stressed the U.S. was committed to helping the nations of the Pacific to successfully adapt to the effects of climate change and winning the fight against this existential crisis. The U.S. Marine Corps also announced its first Net-Zero Energy installation.

“Reducing our greenhouse gas emissions must be a priority.  And I am pleased that we have just released a comprehensive plan to address this challenge. The U.S. Navy and Marine Corps’ Climate Action 2030 is indeed a broad, multi-pronged approach. This strategy, and the commitment it represents, recognises that there is not a trade-off between addressing climate security and our core mission of combat readiness and integrated deterrence.”

“I want you to know the United States stands with you in confronting and prevailing over that unacceptable outcome. We fight alongside you to protect your people, your land, and your way of life. It is a collective, global responsibility to ensure climate change does not drive you from your homes.  It is also a collective, global responsibility that climate change does not rob you of your way of life and your culture.”

The Honourable Carlos Del Toro is the 78th Secretary of the Navy and is responsible for over 900,000 Sailors, Marines, reservists, and civilian personnel and an annual budget exceeding $210 Billion. His priorities include securing the training and equipment successful naval operations demand and addressing the most pressing challenges confronting the US Navy and Marine Corps – China’s naval ambitions, climate instability, Covid’s ongoing impact, and strengthening a naval culture of inclusiveness and respect.