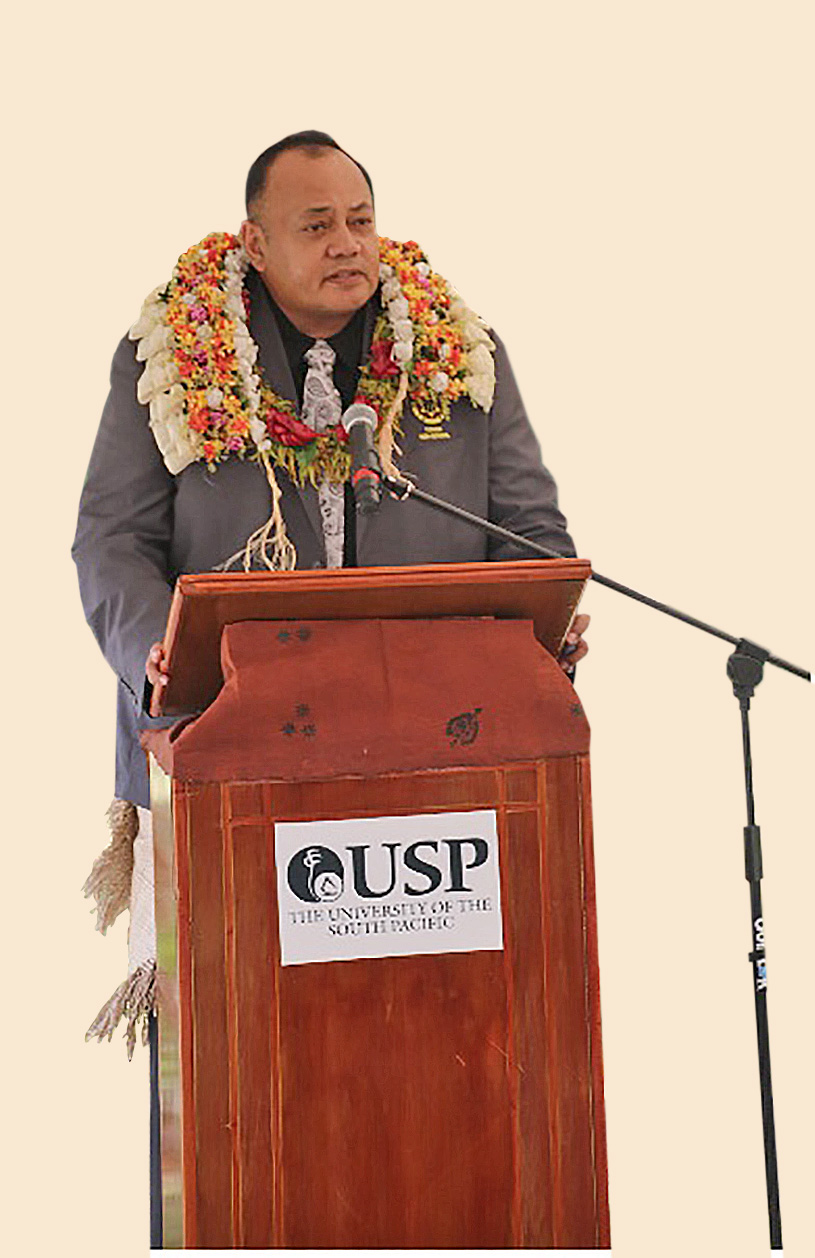 His Majesty the King of Tonga, King Tupou VI, appointed Honourable Siaosi’ Ofakivahafolau Sovaleni, an alumni of the University of the South Pacific (USP), as Tonga’s new Prime Minister through a Royal Warrant of Appointment, effective December 27, 2021.

His Majesty also bestowed the chiefly title of Hu’akavameiliku onto Hon. Sovaleni.

Prior to his premiership appointment, Hon. Sovaleni served as Minister of Education and Training from October 10, 2019, a position, he would hold for the next four years under the new Government. Minister for Police, Fire Services, and Emergency Services, and Minister for His Majesty’s Armed Forces, are among his other portfolio assignments.

The Hon. Prime Minister being a USP alumnus graduated as a Gold Medalist in 2008 with a Postgraduate Diploma for Managers in Advanced Analytics Skills and a Master of Business Administration in 2009.  He has also studied in New Zealand and England, where he received his Bachelor of Science (Honors) in Computer Science, a minor in Mathematics from Auckland, New Zealand and his Master of Science in Computation from Oxford, England.

Hon. Sovaleni in his capacity as Tonga’s Minister for Education and Training has served as the Tonga Government’s representative on the USP Council since November 2019 to date including being a member of the USP Council Executive Committee. He has also played an important part in the resolution of the USP’s Vice-Chancellor issue as a member of different Joint/Sub-Committees of the USP Council. He presently serves as a member of the newly formed USP Council Governance and Nominations Committee. Hon. Sovaleni also chairs the USP Tonga Campus Advisory Committee. Through this role, he has supported local strategies for further developing the Campus by actively engaging the private sector and non-governmental organisations (NGOs) as part of the advisory committee.

In his future relationship with the USP, it is expected that the Hon. Prime Minister will continue to serve as the Tonga Government’s representative on the USP Council and other Council Committees of which Tonga is a member. This includes playing a major role in overseeing the implementation of the Pacific Regional Education Framework (PacREF) in ensuring high quality services are delivered to USP member countries. He is also the Pacific Region’s representative on the Board of the Commonwealth of Learning (COL) for 2019-2022, with whom USP maintains a close collaboration.

Hon. Sovaleni has held a number of significant government and non-government roles throughout his career. He was a member of the Pacific Computer Emergency Response Team (PACCERT) and the Regional ICT for Education Working Group.  He was also the Deputy Prime Minister and Minister of Meteorology, Environment, Information, Disaster Management, Energy, Climate Change, and Communications (MEIDECC), as well as the former CEO of the Ministry of Public Enterprises (MPE). He also oversaw the state-owned enterprises (SOE) reform programme, which focused on board governance, compliance, and financial performance.

Hon. Sovaleni previously served as the Deputy Team Leader of the Tonga-Asian Development Bank (ADB) Strategic Programme for Climate Resilience (SPCR). For almost a decade, he worked as the Manager of the Pacific ICT Outreach Programme (PICTO) at the Secretariat of the Pacific Community (SPC) and as a senior official at the Kingdom of Tonga’s Ministry of Finance.

The University is proud of its graduate, the new Tongan Prime Minister, and wishes him well in his new position.