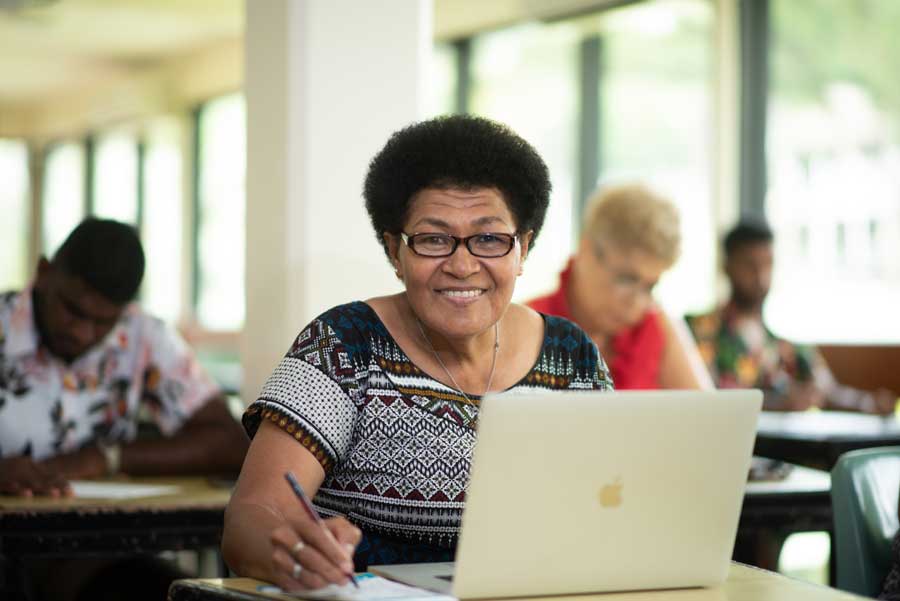 USP has shaped me into the person I am today, says The University of the South Pacific (USP) alumnus and women’s rugby legend, Laijipa Naulivou.

Ms Naulivou rose to prominence as a talented rugby player and pursued her career in sports through education. She joined the Suva Rugby Referees Association making her the first woman in this field. Besides rugby, Ms Naulivou is also a professional in hockey and netball.

The sportswoman holds a Bachelors degree in Management and Public Administration, Applied Psychology and Sports Psychology from the USP.

She credits her Psychology Lecturer, Dr Gaylene Osborne-Finekaso for recognising her talents and proficiency at an early stage and being her pillar of strength by promisingly supporting her during sports consultations.

Ms Naulivou has worked as a sports counsellor, rugby team manager for both the men’s and women’s teams, and a mental skills trainer for various sporting teams preparing to play at the Pacific Games, Commonwealth Games and the Olympics. She also served as a personal and administrative assistant at USP for over twenty years, so applying knowledge from a professional space to the sports field became seamless for her.

She emphasised that as a student, she could communicate with many people and build connections helping her make a difference in society, particularly in women’s lives.

In her capacity as a USP staff, Ms Naulivou was also a member of the USP rugby and hockey teams for many years.

“USP has shaped me into the person I am today,” Ms Naulivou explained.

“I have made many friends along the way and had the opportunity to live a life that many women of our generation were unable to.

“USP showed me all of the possibilities and the big picture to explore my interest in sports.”

Going back in history, Ms Naulivou shared that the idea of forming a rugby team was sparked by two rugby officials from St John’s Marist Rugby Club, the Late George Reade and Pio Bosco Tikoisuva.

She reflects that the two major clubs in Suva at the time were USP and QVS Old Boys-Women. The University team comprised of Tongans, Samoans, and Fijians. The team toured in June 1999 and played two seven-a-side matches before the game between Samoa and France at Albert Park, beating the undefeated National University of Samoa.

Ms Naulivou expressed how men made disparaging remarks when she first started playing rugby, telling women to stay home and care for their families.

“I recall how female players were booed and called various things and names considering the stigma they endured,” she said.

“When the girls did not have a uniform, I would give them money to buy clothes from thrift stores and other equipment they needed to play.”

Despite these challenges, she said she was fortunate to have a supportive family, mentors, and friends who encouraged her and the team to participate in rugby.

“I remember how supportive my father used to be and how he would send me to tournaments in the west even though a few of my siblings were against me as a woman being actively involved in rugby,” Ms Naulivou said.

“From travelling to the west to participate in sports, notably rugby, I have visited numerous places and proudly represented Fiji and USP.”

In 1997, the first national women’s side competed at the Hong Kong 7’s which became a watershed moment for more women trying to break into the sport to not only play club rugby at the Marist 7s but also travel to famous Hong Kong 7s.

The team reached the finals in the bowl competition, narrowly losing to the USA 19-21.

“This has been the highlight of my career,” the proud sportswoman tells.

“At this point, we returned with the trophy, and the men who were given more support did not make it with a trophy.”

“From here on, we were taken a little more seriously, but we knew we had a long way to go in changing the mindset of society,” she explained.

Ms Naulivou was appointed Team Manager for the Fijiana to its very first outing to the HSBC World Rugby Sevens in Guangzhou, China in April 2013; and two months later to its first World Cup tournament in Moscow, Russia where they won the bowl against Netherlands.

Besides managing rugby teams, Ms Naulivou, a former national hockey representative also managed the gold-medalist Fiji Men’s Hockey team to the 2015 Pacific Games in Papua New Guinea and the Men’s Oceania Cup in New Zealand.  She was appointed as Secretary to the Fiji Hockey Federation in 2012.

Ms Naulivou is a mother of two and currently works as a volunteer in schools. Her advice to women is never to give up and follow their dreams.

She concluded that there should never be any barriers to learning and her key to success is to keep pursuing one’s passion.

To develop your interests through education and learn more about USP’s programmes, visit; www.usp.ac.fj