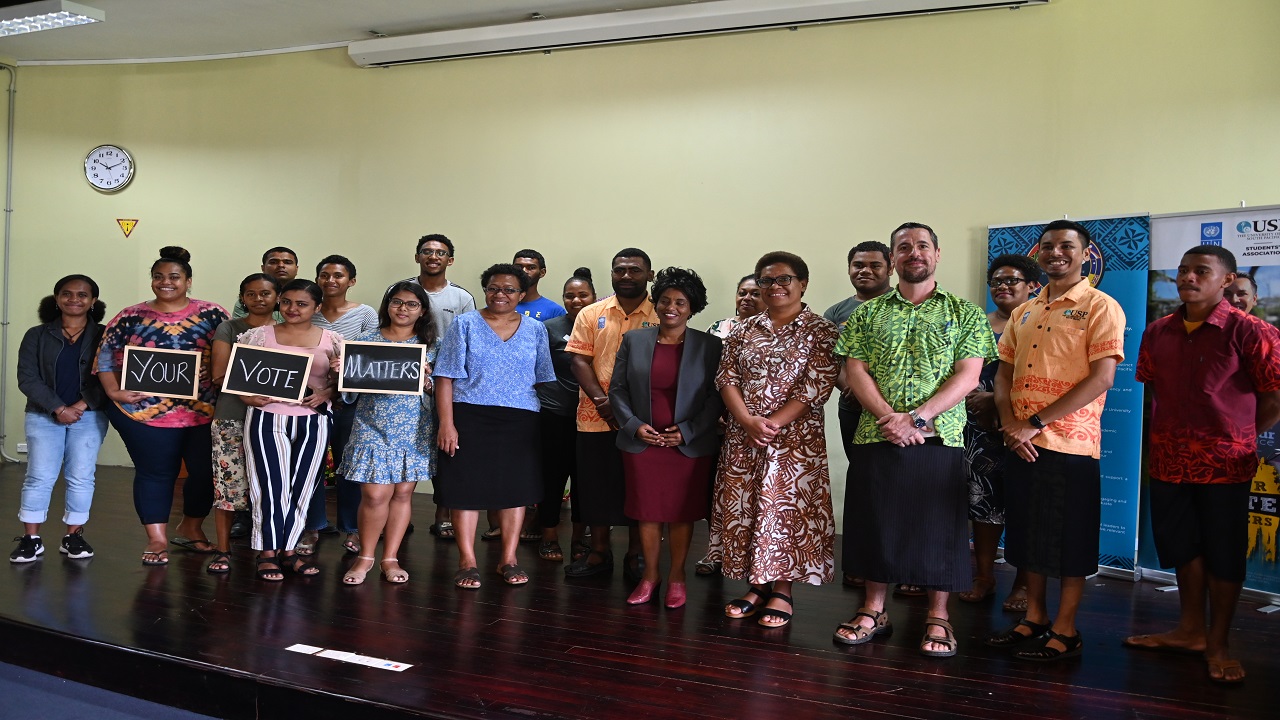 The University of the South Pacific Student’s Association (USPSA) held their final session of the ‘Your Vote Matters’ Project workshop at the Laucala Bay Campus this week to inform and encourage young people to vote.

Speaking at the opening of the session, The University of the South Pacific (USP) Director Education, Dr Matthew Hayward said, “The opportunity to vote for first-time voters is a chance for young people and students, in particular, to have a say in the leaders who are going to represent them and represent their country over the next four years.”

“So, a chance to choose leaders who are going to represent their values. We’re going to represent their interests and have a chance to listen to the policies of politicians, to look at the actions of politicians and to see who truly represents them and their interests. For our students to be exposed and involved in this kind of conversation at this stage declares their commitment to participate as leaders in the decades to come,” Dr Hayward added.

Guest Speaker, The Pacific Community (SPC) Principal Strategic Lead – Pacific Women, Ms Mereseini Rakuita also highlighted that every single young person in the University had the right to determine their next government.

“In the context of USP, we are talking about over 10,000 votes. Every single vote matters. All voter turnout is a crucial indicator of the level of citizens’ interest and participation in political processes. In Fiji, the voter turnout in 2014 was at 84.6% of registered voters in 2018, this fell to 72.5%,” she added.

She also reminded students that it was their responsibility to exercise their vote and to choose the candidate that best represented Fiji that they wanted for their tomorrow.

“We are all delighted and equally excited as on this important occasion, ensuring greater citizen participation in the democratic process into the support of more inclusive elections in the world is one of UNDP’s key goals,” she added.

Ms Workie said, “We are truly delighted to partner with The University of South Pacific’s Student Association for this particular project. Why is this project so much significant? Its significance is the focus on youth and young voters who are the main target of this project, with us being almost 60% of the population of the Pacific. This project in partnership with the Student Association is about harnessing that demographic dividend, encouraging young people to be active citizens in democratic processes and engagement. It’s all about you because we deeply care about the future of this country.”

Yesterday’s workshop was a culmination of the social media campaign and workshops which were held in two other main divisions across Fiji engaging, informing and encouraging as many young people as possible to have their voices heard through their vote at the 2022 Fiji General Election next month.

The project will conclude with an intergenerational talanoa cocktail event scheduled for Thursday 3rd November from 6 pm at the USP Oceania Centre. The Supervisor of Elections, Mr Mohammed Saneem, USP’s Acting Head of School of Law and Social Sciences, Dr Sandra Tarte and National Gender Youth Activist, Ms Alanieta Atama will take the floor this evening which will be moderated by USP Students Association Deputy Secretary General, Mr Aneet Kumar.