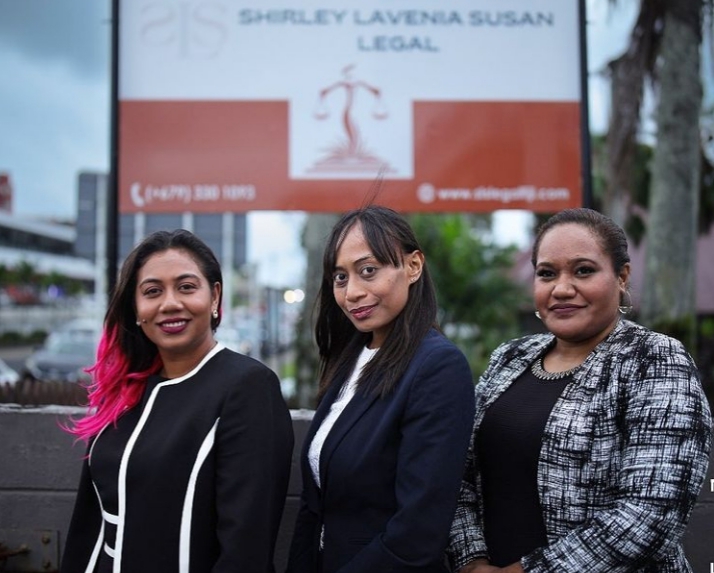 What started a year ago as scribbles and notes on a vision board and a daring checklist has now turned into a dream come true for USP law alumni Shirley Tivao, Lavenia Bogitini and Susan Serukai, who took a giant leap of faith to open up their own law firm, SLS Legal, in Suva last Friday.

The trio, with almost 30-plus years of combined service as criminal prosecutors, are inspiring young local women to venture into entrepreneurship and leadership roles in the legal fraternity.

“Exactly one year ago, we began planning for this new law firm – a vision board, a checklist with deadlines and zero loans from the bank to get us started,” said Ms Serukai, the firm’s managing partner.

“Just a lot of love, sacrifices, support and prayers from our family and friends. It took us a good three months to finally agree to a name before we registered the business.

“It definitely took a lot of hard work and dedication to get to where we are today. It’s not impossible to achieve your dream and that’s the message we want to share; we want to inspire other women to be confident, courageous and committed in their journey to achieving their dreams.”

According to Ms Serukai, their website www.sls.legalfiji.com, which was also launched at the official opening event, was an ideal investment to increase their business visibility and marketing of their legal services, packages and expertise.

“We were practising criminal law before this move but we are now ready for the big world. We’ve learnt from the best and we’re ready to move on,” she said.

“We can be competitive and also good friends at the same time. We critique each other’s work in an honest and transparent way, especially when we’re dealing with all the emotions and challenges that come with the profession.

“But at the end of the day, what makes our relationship as friends and business partners work, is the respect, love, honesty and appreciation of what each partner brings to the table.”

The three women from Fiji are graduates of The University of the South Pacific and worked together at the Office of the Director of Public Prosecutions for eight years. Ms Tivao hails from Motusa, Rotuma and graduated from USP in 2013. She was admitted to the bar in 2014 and started her career at Neel Shivam Lawyers before joining ODPP in 2015. She is expected to join the Fiji National University (USP) this year teaching criminal law and evidence law.

Ms Bogitini hails from Namuana, Tavuki on Kadavu with maternal links to Vanuavatu and Vanuabalavu, Lau. She graduated from USP in 2014 with her undergraduate degree in law and economics. She worked in the private sector before joining the ODPP.

Managing partner Susan Serukai hails from Vaturua, Nakelo, Tailevu and began her career as a criminal prosecutor at the ODPP before continuing her practice in Nauru. She has also completed litigation programmes in Samoa and New Zealand.

“We’re excited to get out there and learn new things. It’s a journey for us. A journey of learning the law, to broaden our horizons into other areas of law and so particularly our expertise is criminal defense because we were all prosecutors but we would like to explore other areas of law and not just stick to our niche at the moment,” Ms Tivao shared.

“So ‘the world is your oyster’ literally is here because we can broaden our horizons and make the decision on where we’d like to go.

“Our approach now is more client-centered than it is about making money so we put the clients’ needs first.”

While the women are focused on strengthening the internal systems from the ground up before expanding operations, they are also looking at the bigger picture of where they’d like to be in the next five years.

“At the moment, it’s just the three of us. We wanted to work from the ground up, we wanted to work with each other in this new venture. We wanted to sort out internal systems together, and then once we have that, we will be looking to hire in the near future,” Ms Tivao said.

“In 3-5 years, we’d like to be at the forefront of creating precedence in our country in terms of civil law, criminal law. We did that at the ODPP and that’s the beauty about law – the law is ever changing, it’s never one plus one equals two.

“Our message is to follow your dreams, I know it’s cliché but really, your life is your own, whatever decision you make or want to pursue, do it. There’s no one holding you back but you.”

During the official launch, Minister for Commerce Faiyaz Koya acknowledged the three ambitious young women for choosing such a noble profession and taking on the endeavor of providing Fijians with equal access to justice.

He said law and faith in justice were fundamental pillars on which a democratic society and communities thrived.

“This is why the Fijian Government remains committed to providing every Fijian greater and equal access to justice and legal support as embedded in our constitution,” he said.

“In every respect, democracy is the centerpiece of our society – and over the years we have provided Fijians better access to justice – by investing in improving our legal and judicial infrastructure, laws and processes.

“Lawyers have an obligation towards society, to demonstrate competence and honesty in everything they do.

“While young law graduates have a range of opportunities to choose, the journey of these three ambitious women as entrepreneurs signifies that they have broken barriers in society where young women may not have been given the support that they deserve, to make a name in the legal fraternity.”

Mr Koya said SLS Legal joined the league of the many powerful, passionate and strong women who were taking risks and defying odds in making their own mark in the world.

He said SLS Legal aspired to place high priority on family values alongside fulfilling their oath to their profession and service to the community.

“In my experience, the key to succeeding in this industry rests on empathy, ethics, respect – respect for your peers, above all — being fair and just. This will enable you to promote an inclusive culture succeeding as a firm in providing the highest quality of service,” he said.

“I am told, two of the Partners, Ms Serukai and Ms Tivao were raised by single parents who had to assume the role of a mother and a father – but now share twice the celebration and pride of seeing their daughters become successful entrepreneurs and professionals.”

As a parent, Mr Koya said that feeling was immeasurable and paid tribute to the parents of the SLS Partners – Paulo Serukai, Emily Tivao, Samuela Bogitini and Sera Tukana for nurturing women who were making a tangible change in society.