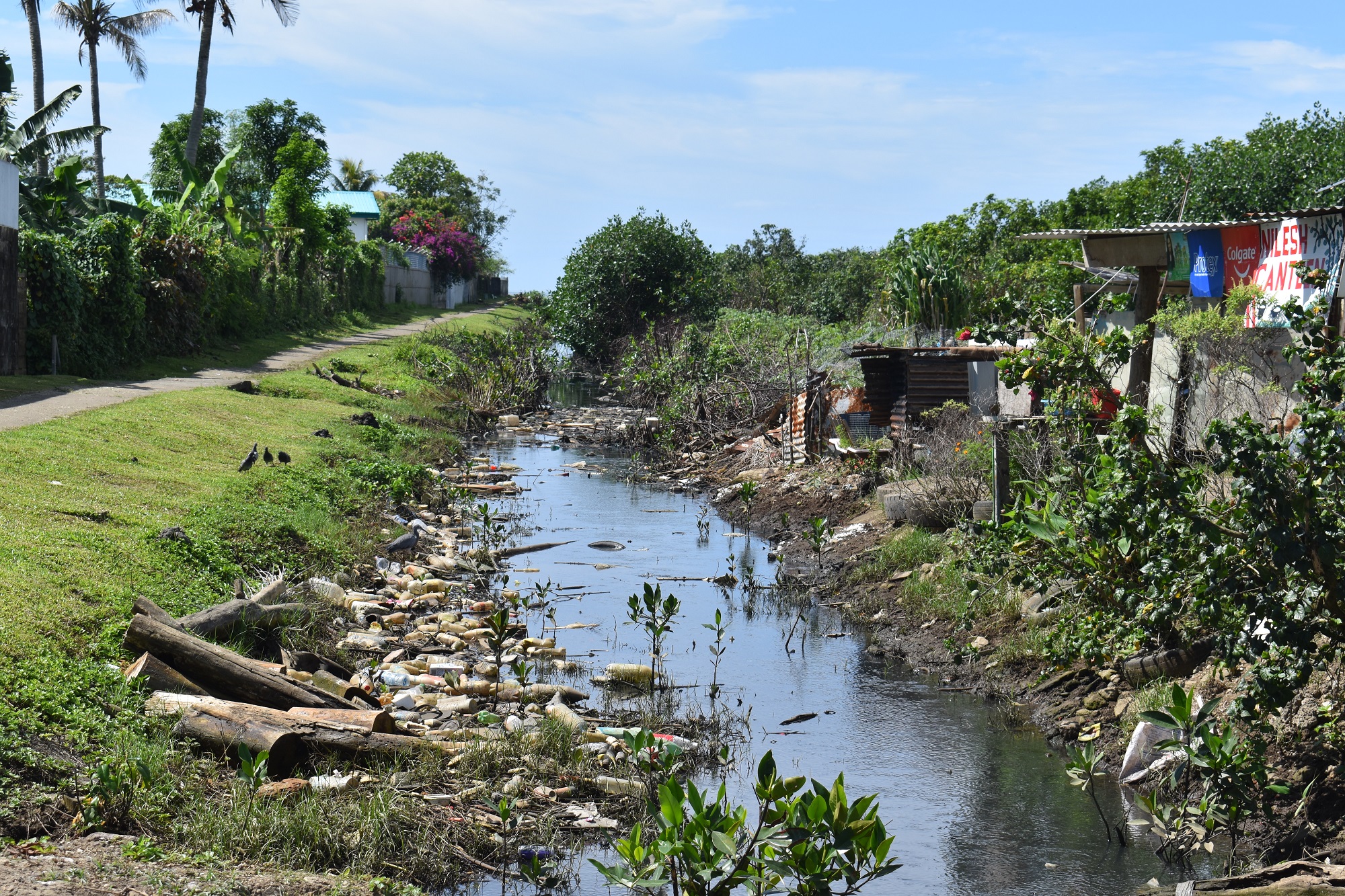 Levels of pollution in some Suva residential and industrial areas, including illegal dumping of industrial waste, breach of safety procedures and unabated pollution of key waterways indicate not only the scale of the problem but difficulties in enforcing legislation and punishing the wrongdoers. Wansolwara interviewed Ministry of Waterways and Environment Permanent Secretary Joshua Wycliffe about the issue.

What is the extent of pollution in Fiji’s urban areas, particularly the Capital City?

Wycliffe: Pollution concentrations in urban areas around the world are normally huge because of war and intense human activities. There is greater amount of consumption, consumption of energy as well and high emissions of air pollutants.

This also includes the exploitation of natural resources due to higher population density and expensive lifestyle, not normally seen in rural areas.

Freshwater pollution is not only in the urban areas in some countries but also in rural area in countries that are dependent on agriculture and farming.

What type of pollution is the most concerning for the ministry and what progress has it made to address or curb this problem?

Wycliffe: Any and all pollution is a concern. The most common pollution we see is air pollution, and a common type of air pollution through the release particles into the air through burning of household garbage.

We have had situations where we have been able to work with families, community groups, our focus groups and address the problems with them.

We call them community awareness programs. There are face to face meetings and radio back shows.

At a facility level, the ministry has initiated the Environment Monitoring Committee (EMC) where stakeholders convene on a monthly basis to discuss emission issues from an organisation or facility. The ministry has a facilitating representative who sits on it.

Can the Ministry provide an update on action being taken against companies that violate environmental legislations?

Wycliffe: Majority of businesses in Fiji are compliant. There are companies who do not do it because they’re careless, or they don’t want to do it. Some companies try and cut corners. In Fiji, it’s true that we’ve had oil spillages.

We’ve had illegally dumped pollution into waterways and we’re handling these issues. We’ve got only a few inspectors so we can’t be everywhere.

But we have a Department of Environment base compliance surveillance program, which includes drone technology implementation program.

We have data management professionals whom we’ve trained and rely on to provide information.

We have secret cameras placed all over the country to capture live breaches and provide input to the department. We rely on the public to let us know and many times, the public are quick.

People who are affected come to us immediately, and we have inspectors who rush to the facility, inspect on the spot and provide an assessment data report. We’ve got five options including an improvement notice to the breaching party; a prohibition notice which prohibits them from operating, non-compliance notice; remedial notice, which is something that they need to do at once.

When you are ordered to stop work, the breaching company is meant to stop immediately.

Most businesses do not like prohibition orders and stop work orders because that would mean loss of income and loss of jobs or people. So, it actually is a hard lesson for companies to learn.

What challenges does the ministry face in monitoring the illegal and dangerous discharge of waste and effluents into the environment?

Wycliffe: The challenges include the topography of the country. It’s a country with a smaller population but with a very wide dispersion of islands.

So there are a lot of remote islands and remote spots and to be at every nook and corner makes it challenging.

Eyewitnesses aren’t there all the time so our reliance on how to capture issues becomes challenging, like midnight violations and breaches..

Sometimes eyewitnesses also are reluctant to give statements for prosecution purposes. We’ve appointed for the first time seven prosecutors within the Department of Environment who able to prosecute people and companies but they need eyewitnesses who have seen the breach and reported it.

Polluters refuse to take responsibility for their actions. In extreme situations, there are organisations that refuse entry to certain staff who are tasked with carrying out inspection. In this case, we have to get a court order to get the police involved.

How is the ministry addressing or tackling these challenges?

Wycliffe: When there is a breach and when we cannot go in to inspect a facility accused of breaches, we seek a court order to enter the premises, but that’s very rare. We have partnered with The University of the South Pacific (USP) on several occasions where we have worked with consultants.

We also go to  private companies and when the required expertise is not locally available, we send samples overseas to test. The seven prosecutors who work for the ministry are fully equipped and trained to prosecute companies and individuals in court.

We also have an additional 415 litter prevention officers based all over Fiji. Many of them work for city councils and statutory organisations, waste management authority, monitoring and enforcement authorities. They are all co-ordinated under the Department of Environment.

This January, there was petition signed by the businesses and residents in Laucala Beach industrial area opposing a proposed Asphalt Plant project. It was signed by 565 people. Higgins Fiji, the company that is investing in the project wanted to carry out an Environment Impact Assessment on the proposed project. What were the results from the assessment and has the ministry stepped in to address concerns about damage to the environment?

Wycliffe: We worked with them to ensure that we put an environment impact assessment for the proposed project and to relay our concerns if we had any, and the concerns of the community as well.

That’s why we have what we call an environmental impact assessment, a legal instrument to help us assess a project before we approve it. In terms of breaches, we issued stop work notices against operators, including cement factories. We’ve also done road works, quarries, and extraction companies.

The ministry had also issued stop-work notices against four cement operators in Lami over health concerns and air pollution, including measures related to clinker. Can the ministry provide an update about this situation?

Wycliffe: We are working with the community and the cement companies. We have a strong Environment Monitoring Committee (EMC) in that area, with an environment monitoring committee that works closely with cement companies to identify the gaps and ensure they are fixed before operations can resume.

Another concern is derelict vessels in the Suva Harbour. How dangerous are these to the environment, and what is being done to address this?

Wycliffe: We work across with Fiji Maritime Safety Authority (MSAF) for the removal of such vessels. We also work with infrastructure across the industry and provide support to the companies that have actually had the accident.

The ministry is working with the Fiji Ports Corporation and MSAF to ensure the most vulnerable habitats are not harmed –  the mangroves, the corals and the marshes. If they are, we take action.

In terms of waste spillage from sewerage systems and industrial areas in Kinoya, Laucala Beach, Vatuwaqa, Laucala Bay and Suva Bay, how damaging is this for the environment, considering the high population density and outdated infrastructure?

Wycliffe: We have worked with the Water Authority of Fiji and sent notices for improvement. We ensure that in that particular area, the issue is rectified before ongoing work is allowed.

If entire operations are stopped then you and I won’t get water. So we identify those areas where there are gaps, and ensure that we have gaps fixed going forward.

What are some areas the ministry is working on to boost its current waste management system?

Wycliffe: We’ve banned single use plastic bags and we continuously monitor markets and conduct surprise checks at supermarkets. We take action on people who breach that as well.

The department’s prosecutors take action and a draft regulation on plastic bags is also under review to see how else we can improve the legislation.

We are working closely with the Solicitor-General’s Office. Styrofoam ban is planned and anticipated to come through in the coming months. We’re also consulting our various stakeholders and looking at container deposit regulation.

A system that we would like to see is how we can regulate the deposit of food and beverage containers, and companies using PET bottles. We’ve launched 50 community hotspot compost pits, assisting companies to compose their waste.

So it’s twofold: one is to be able to have organic manure for agriculture, and two the waste is not laying around decomposing in the environment.

The ministry is in the process of putting a national seminar policy that is intended to promote the concept of recycling with the ultimate goal of forming a set of legislations to engrave recycling into everyday lives. Some of you will have seen the most recent zero waste, private sector program that the ministry launched prior to COVID-19 hitting us.

The ministry also has drafted its national solid waste management strategy which is in the process of being finalised.

It details the current waste management practices and outlines the inadequacies that exist in the system at the moment, the proposed action plans, and details of the programmes to be implemented nationally, locally and at community levels.

There’s the National Implementation Plan, which is an international treaty requiring member countries like Fiji to phase out and eliminate the most persistent toxic chemicals that would have adverse impacts on human health and the environment.

These include emissions that come out of our air-conditioning and refrigeration operations across the country. Fiji is well on target to meet required targets based on its international commitments.

The above is an edited excerpt of USP Journalism students’ zoom interview with Mr Joshua Wycliffe, the permanent secretary for the Ministry of Waterways and Environment on June 22, 2021.