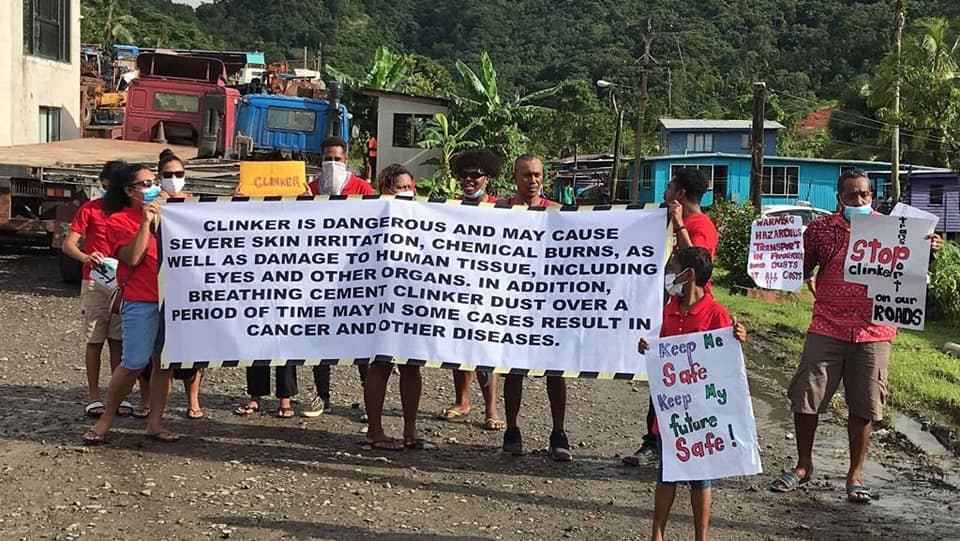 “I have never been in a situation where I’ve had to fight for our right to breathe clean air,” says Lami resident Sydel Whippy.

She worries about a cement manufacturing chemical, clinker, that fills the atmosphere in Lami, posing a risk to the health of the residents of the densely populated area.

Whippy has lived in Lami for the last 35 years. There are other environmental problems to cope with in the township, where many industries are located, but she feels that the clinker pollution is the most dangerous.

“Everyone in the area is inhaling the dust — pregnant mothers, young babies, pedestrians and passengers on buses,” she said.

The alleged sources of the problem are two cement factories Tengy Cement (Fiji) Limited and Pacific Cement Limited in Lami.

In 2018, the Environment Ministry received four complaints and issued a stop work notice to the two factories.

At the time, the Permanent Secretary for Environment, Joshua Wycliffe, said the ban would only be lifted if the dust emissions stopped.

He said that the companies would be required to provide dust mitigation plans. The notice was lifted in 2019, but a ‘prohibition notice’ was issued in March this year again to both companies for breach of the earlier notices.

Mr Wycliffe said the dust emitted from the two factories may not have met the national air quality standard.

A major ingredient in cement making, clinker is known to cause skin irritation, serious eye damage, respiratory irritation and even cancer, according to a ‘Safety Data Sheet for Portland Cement Clinker’ report released last year by the CEMBUREAU, the European Cement Association in Belgium. The report revealed that certain technology and regulations should be in place to ensure that the emission of dust particles or chemicals do not cause health problems.

The factories are in the vicinity of several communities between Nadonumai and Namuka-i-Lau on the Queens Highway, with a potential exposure to a population of about 20,000.

Whippy and a group of protesters feel that the cement companies are not following proper safety procedures in the transportation of the chemicals along the Queens Highway, passing through Lami Town.

She believes that the people living just metres away from the main road are exposed, and at great risk.

Ms Whippy says the chemical has been escaping into the atmosphere during transportation and offloading.

“I have taken so many photos and videos of the unloading of the clinker and the wind direction blowing it towards Suva City and the market, where a lot of people converge,” she said.

According to Whippy, a number of people in the community had become asthmatic with skin irritation as a result of exposure to clinker.

Despite the numerous protests Whippy has organised, the practice continues, she says.

“We are trying to figure out what the next step is. I have been getting anonymous calls telling me to take it to the Prime Minister, but I do not know how that will work. We are going to keep voicing our concerns.” Another Lami resident, Susan Leitupo, said the dust from the cement factories coated their windows, and filtered into their homes.

Her family suffered from some health problems after breathing in the dust.

“It affects my eyes. It stings and I couldn’t see properly. My husband’s skin becomes itchy when he comes into contact with the dust. It is still a horrible experience,” Leitupo said.

Ms Whippy, a member of the Environment Department’s Environment Monitoring Committee, feels that the Ministry was not doing enough, given the length of time the problem has dragged on for and how the cement companies keep reoffending.

“They do seem like they are trying (Environment Department) but nothing much has changed,” she said.

Questions sent to Pacific Cement Limited and the Lami Town Council remain unanswered when this edition went to press.