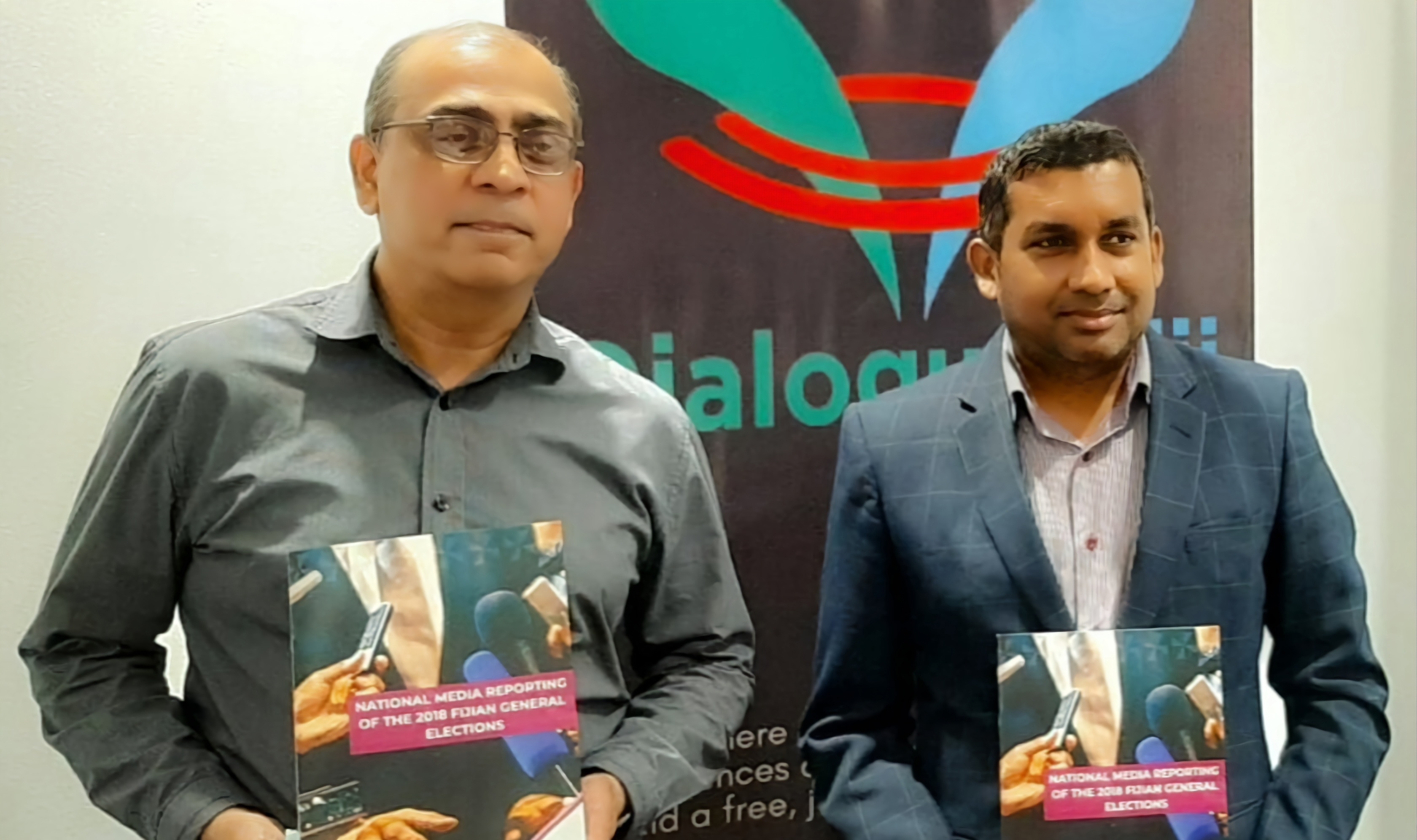 Addressing the training development deficit in the local media industry can stem journalist attrition and improve coverage of election reporting in the country, says Pacific media expert Dr Shailendra Singh during the recent launch of the National Media Reporting of the 2018 Fijian General Elections report in Suva.

“The Act does nothing for training and development or journalist attrition. In fact, the Act may have exacerbated attrition,” he said.

This situation, Dr Singh said, highlighted the importance of training and development and staff retention, which were longstanding structural problems in Fiji and Pacific media.

“According to various media watch groups, the Act has had a chilling effect on journalism and fostered a culture of media self-censorship.

“This underlines the role of financial viability and newsroom professional capacity in news coverage.”

He said two core media responsibilities in elections were creating a level playing field and acting as the public watchdog.

“It seems doubtful that these functions were adequately fulfilled by all media during reporting of the 2018 Fijian General Elections.”

Dr Singh said the research also recommended the even distribution of state advertising among media organisations as well as the allocation of public service broadcasting grants fairly among broadcasters to minimise financial incentives to report overly positively on any government.

According to the report, the FijiFirst Party received the most media coverage during the 2018 Fijian General Elections and this was expected given its ruling party status.

However, variance in coverage tone and quantity appeared too high.

“The largely positive coverage of the ruling FijiFirst party could be deemed irregular. It questions certain media’s ability to hold power to account,” Dr Singh explained.

He said challenger parties were forced to respond to allegations in news stories and were grilled more than the incumbent during debates.

“It should be other way around. In such situations the natural conclusion is journalist bias but only to a certain extent,” he said.

“Media bias can be intentional or unintentional but the impact is the same.”

While the report found that certain media outlets in Fiji seemed to privilege some political parties and issues over others, distinguished political sociologist and Pacific scholar Professor Steven Ratuva says this could be due to several reasons such as direct political and ideological alignment of the media company to a political party or conscious and subconscious bias of journalists and editors.

“The more sensational the story the more sellable it is. The media can feed into election frenzies, inflame passion and at times encourage boisterous political behaviour and prejudice which can be socially destructive.

“The media can also be used as a means of sensible, intellectual and calm engagement to enlighten the ignorant and unite people across cultures, religions and political ideologies.”

He said keeping an eye on what the media did required an open, analytical and independent approach and this was what the report attempted to do.

The research found that after FijiFirst, the larger and more established opposition parties SODELPA and NFP, were next in terms of the quantity of coverage, but were more likely to receive a lesser amount of positive coverage and at times found themselves on the defense in responding to FijiFirst allegations, rather than being principles in the stories.

The smaller, newer parties had to content themselves with marginal news attention and this was generally consistent across four of the five national media that were surveyed — the Fiji Sun, FBC (TV and radio), Fiji Television Limited and Fiji Village.

“The only exception was The Fiji Times, whose coverage could be deemed to be comparatively less approving of the ruling party and also less critical of the challenger parties,” the report found.

“Besides comparatively extensive and favourable coverage in the Fiji Sun, FijiFirst made more appearances on the major national television stations, FBC and Fiji One, as well as on the CFL radio stations and news website.”

The report noted that even in special information programmes where news media allowed candidates extended time/space to have their say, the FijiFirst representatives enjoyed a distinct advantage over their opposition counterparts in the two national debates, with regards to the number of questions asked, the nature of the questions, and the opportunity to respond.

“When the two major opposition parties were in the media, it was often in order to respond to allegations by the ruling party, or to defend themselves against negative questions,” the report noted.

“The results could explain why the government accuses The Fiji Times of anti-government bias, and the opposition blame the Fiji Sun and FBC TV of favouring the government. However, there are other factors other than media/journalist bias that could be attributed to the lack of critical reporting.

“These could range from the news organisation’s and/or newsroom’s partiality towards the ruling party politicians and its policies. The reporting could also be affected by the inexperience in the national journalists corps to report the elections in a critical manner.”

This observation, the report highlighted, was supported by ‘issues balance’ results indicating that key national issues, such as the economy, were understated.

The focus was instead on election processes, procedures and conduct. Another factor in the reporting could be news media’s financial links to the government.

As Fiji prepares for its next general election, Dialogue Fiji’s Nilesh Lal said it was important to put the spotlight on factors that impinged on an even electoral playing field.

“Given the importance of news media in disseminating electoral information and shaping public opinion, it can profoundly influence electoral outcomes, and therefore needs to come under scrutiny,” he said.

“There may also be imperatives to consider safeguards against the negative impacts of unequal coverage of electoral contestants through legislating as other countries, like the US, for instance, have done.

“Alternatively, media organisations can self-regulate by instituting internal guidelines for election reporting. A good example is the BBC’s Guidelines on election coverage. Another alternate could be the formation of an independent commission/committee made up of media organisation representatives and political parties representatives that can set rules and quotas for election coverage.

“For example, in the UK, a committee of broadcasters and political parties reviews the formula for allocation of broadcasting time, at every election.”

Mr Lal said the purpose of the report was not to accuse any media organisation of having biases but rather to show that inequitable coverage of electoral contestants was a problem in Fiji that required redress at some level if “we are sincere about improving the quality of democracy in Fiji”.

He said they hoped the report would initiate some much-needed public discourse on the issue of equitable coverage of elections by media organisations.