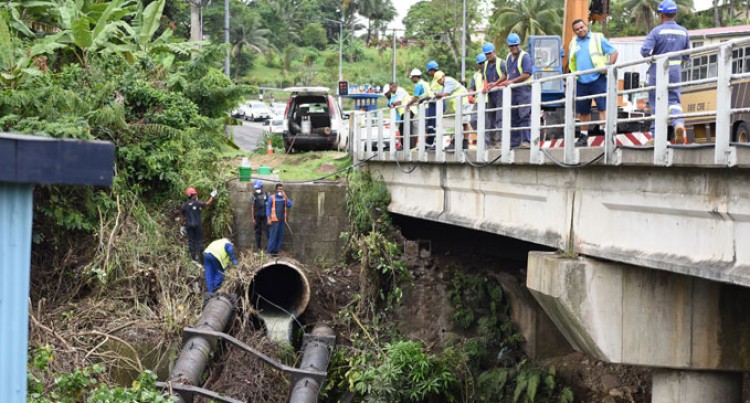 The date 6 December 2014 is etched in the minds of the residents of Veitavaya settlement in Cunningham, Suva. It was the day that they found themselves in a living nightmare.

The major sewage pipe running along the Suva-Kinoya corridor had collapsed, spewing out millions of litres of raw sewage into the Cunningham creek – 200 litres of waste per second churned straight into the Samabula River, and out into Laucala Bay.

More than five years later, memories of the catastrophe are still fresh, as recounted by residents like Meliki Liku.

The look of alarm on the face of the mother of six is palpable when the subject is brought up.

“The sewage pipe was rusty, with holes in it. We knew that one day it was going to give way. It was only a matter of time,” said 46-year-old Liku.

The catalyst for the disaster was continuous heavy rain for a week that caused flash floods in parts of the affected areas.  It caused the collapse of the outdated infrastructure, dating back to the colonial era.

The end result was the declaration of an environmental emergency by Fiji authorities as the polluted waters system and the stench from the spill posed a great public health risk.

The Environmental Emergency Declaration 2015 passed by Cabinet banned swimming or fishing in and around the Laucala Bay.

“When the pipes burst, the water turned greenish and the stench was unbearable. The spill pushed some of the raw waste and other rubbish right to our doorsteps,” Liku said.

“The stench worsened when it rained. We were scared for our children because there were so many rats scurrying around. The rats were the size of a mongoose. The water was really disgusting to look at and people who used to fish in the creek could no longer do that. If we wanted fish, we had to hire a small boat to take us to the reef.”

Mother of two Salania Rasova also recalled the day she felt helpless when their food source became contaminated with raw waste from the spill.

Like many families in the settlement who depend on the nearby rivers and creeks for their livelihoods, Rasova said that on that day, their “bread and butter” was gone.

“Many women in this area fish in the creeks and when the spill happened, we really felt helpless. There was nothing we could do. We are happy though that this is behind us. We don’t want to relieve that experience again,” she said.

It took the  Water Authority of Fiji 18 days of continuous major repair works to bring the situation under control, as the affected residents waited in despair.

While a temporary bypass brought some relief, the incident highlighted how the failure to maintain the infrastructure and bureaucratic bungling contributed to the worst sewage spill in Fiji’s history.

In the 2014 Auditor General’s report on special projects, delays were noted for the implementation of a major $US12 million ($F23.5m) sewerage upgrading project for the Suva-Nausori region.

According to the report, the project was awarded to Fletcher Construction without following proper procedures. This slowed the upkeep and maintenance of the sewerage pipes.

Media reports at the time also highlighted the distressing state of the rivers and creeks in the area even before the spill. Researchers have indicated that an issue of concern is the untreated wastewater that does not go through the sewerage system like piggeries and drainage from homes.

“What has escaped attention during this environmental emergency, is that the creeks and rivers in the local area have always been severely polluted, and the entire shoreline in the Suva area is moderately polluted,” an article in The Fiji on February 7 noted.

Eleven years before the great Suva sewage spill, an Asian Development Bank environmental summary of the Suva-Nausori water supply and sewerage project indicated how precarious the situation was.

“Sewage disposal in Suva-Nausori is a major problem and health risk. Less than 45 per cent of Suva’s urban population is connected to piped sewerage systems. Septic tanks and pit latrines serve the remainder,” the report noted.

“Industrial discharges of wastewater to waterways and sewage overflows and exfiltration from the failing sewerage systems are major contributors to the aquatic pollution.”

The 2003 ADB report added that sewage overflows were often caused by sewerage pump failure and blocked or broken sewer pipes.

The report indicates that without regular investment and improvements to the infrastructure, such overflows can re-occur.

Today, the water at the Cunningham Creek and Samabula River is looking cleaner and the stench from the spillage is long gone.

But the residents are still nervous. They believe that more secure pipe upgrades are needed to keep up with population increases.

The Kinoya sewage treatment plant was initially built to cater for 77,000 persons, and not the 120,000 population it currently accommodates.

Improvements to the treatment plant such as inlet works, odour control and sludge treatment, dewatering, and disposal systems offer some form of hope that efforts are being made to ensure an incident like 2014 sewage spill doesn’t happen again.

The Cunningham residents do not want to relive that dreaded day – 6 December 2014.