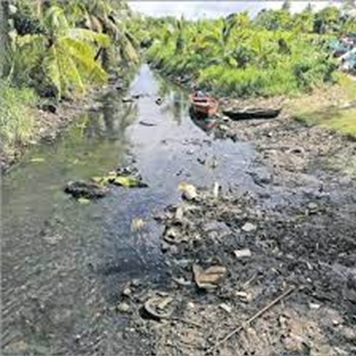 For over two decades, Merewalesi Lewadakale has seen many changes in Wailea, ranging from population increases and land development to vast expansions into commercial and industrial businesses.

But one change that has left her and many other families concerned about their future is the increasing industrial pollution of the Wailea river that runs through the settlement.

Wailea settlement is one of three communities adjacent to Fletcher Road on the outskirts of Suva. It is considered one of Suva’s oldest informal settlements, established more than 70 years ago on land that was originally earmarked as a mangrove reserve.

Lewadakale ruefully reflects how she witnessed the Wailea river gradually deteriorate before her eyes.

Once, the narrow, winding river boasted a rich biodiversity and served as a source of fish, crustaceans and seashells for hundreds of families in the area.

Today, the same river is a dumping ground for various types of waste, including industrial oils, machinery and household garbage. The river is polluted by small industries who flout the law, and by individual families, for lack of awareness and an efficient waste management system.

“Ten years ago private contractors were hired to clear the debris from the river but they couldn’t proceed further because the heavy machinery was causing damage to the houses and land near the river,” said Lewadakale.

“Many attempts were made to clean the nearby river and creeks over the years but it was all in vain, as rubbish kept piling up.

“Today, more houses are built on that land and it is more difficult to clear up the rubbish and debris polluting the river.”

Ongoing rural-urban migration to Suva has seen people move into ‘informal settlements’, which have encroached mostly into mangrove swamps and reclaimed land. Many informal settlement residents live below the poverty line of $FJD 2,179.39 per adult equivalent (PAE) per year.

Residents say that the pollution built-up gradually, and worsened as the number of families and industries increased.

The Fiji Bureau of Statistics 2007 census noted a population of 1,922 at the Wailea informal settlement while Veidogo informal settlement and Vatuwaqa formal neighbourhoods had a total of 4,153 people. Lewadakale says that since then, the numbers have increased.

A 2015 early childhood community mapping report by Save the Children Fiji on Wailea settlement noted that fishing was a source of income for most families in the area but expressed concern about waste from nearby factories, poor drainage, and poor disposal of sewage .

The report also noted that children experienced common health issues and skin diseases, such as scabies and diarrhoea.

“Beside the Wailea community runs a stream that links to the Vatuwaqa river. The community has mentioned that industrial waste is dumped into the stream,” the report noted.

“There is also a sanitation risk due to poor drainage and unsecured water sources, along with skin and water-borne diseases and mosquito infections.

“Consultation must be done with local companies on how their industrial waste affects the Wailea community and better waste management system,” the report read. It is unclear whether five years after the Save the Children Fiji report any recommended actions/consultations have been carried out.

Tomu Lasa, a community leader in Vatuwaqa, agreed with the effects of the polluted waterway, and called for people to act responsibly when disposing their waste.

He said children and youths were often seen swimming in the river despite the health risks.

“It’s not a good sight to see children swimming in the dirty river, with all sorts of rubbish floating nearby or stuck on the river bank,” he said.

“This has led to many people having skin diseases, not to mention the waste water that flows this way during heavy downpour. The foul smell is unbearable for families that reside near the river.”

According to the 2007 Fiji census report, the increasing population in informal settlements exerted enormous pressure on the surrounding natural ecosystems, alongside vast developments in economic activity.

Studies on industrial waste abroad have shown that improper disposal in waterways and communities can pollute soil and contaminate groundwater, lakes, streams, rivers and coastal waters.

Whether it is in liquid or solid form, these industrial wastes such as heavy metals, batteries, used computers, leftover paints, oil and pesticides can end up in rivers and streams and even the air, as National Geographic points out.

“Some toxins, such as mercury and lead, persist in the environment for many years and accumulate over time. Humans or wildlife often absorb these toxic substances when they eat fish or other prey,” the organisation said.

A 2013 report on Fiji’s State of Environment released by the Secretariat of the Pacific Regional Environment Programme (SPREP) noted that many informal settlements had little to no access to appropriate sanitation and water.

In many cases, the report noted the move was due to expired agricultural leases.

“There is also an established pattern of residents of formal settlements moving to informal ones due to employment and, in some cases, lifestyle choice,” the report read.

Fiji environment specialist Poonam Devi also identified littering as a cause of pollution in the Wailea informal settlement.

“For a number of years and there has been an urgent need to clarify the issue of pollution in this area,” she said.

“The river alongside the settlement has been an eyesore and residents are carelessly dumping their rubbish into river.

“Flooding is a common hazard to the settlements along the coast, and low elevation exacerbates the environment conditions in occurrences of heavy rain.”

Ms Devi said that communities and individuals should take a strong stand to keep their environment clean.

Lewadakale agreed that littering was also a major cause of pollution in the area, apart from improper disposal of industrial waste from nearby factories.

She said the dumping of rubbish into the rivers and creeks often occurred at night.

“My house is near the river bank and you can hear the rubbish and waste being thrown into the river. It’s sad to see that some people do not have civic pride,” she said.

Ministry of Environment and Waterways permanent secretary Joshua Wycliffe told Wansolwara that they had a team of inspectors to ensure compliance with environmental laws.

Action is taken where clearly outlined procedures for industrial waste disposal are flouted. While Wailea settlers have made some collective effort to clean the nearby waterways, rivers and creeks, the rubbish constantly piles up again. This indicates that a well-strategized, holistic approach is needed to restore the glory of what was once a thriving inshore ecosystem.