Duo stamp mark at USP, research critical to their success 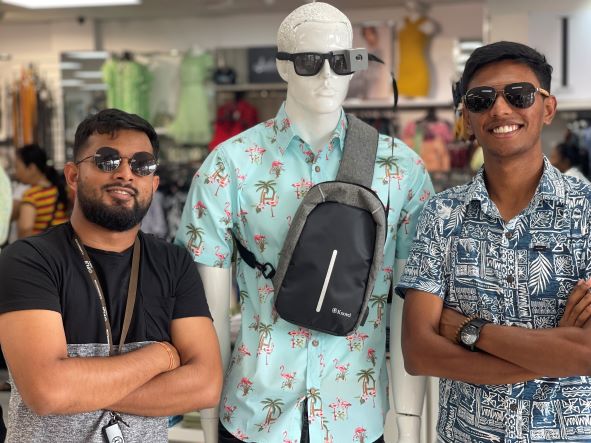 The University of the South Pacific, through two of its budding engineering students last year scaled up the technological ladder through the successful completion and launch of an innovative project.

Shahil Prasad and Salveen Deo’s “Assistive Technology for the visually impaired” garnered praise from lecturers and students alike for their innovative final-year project.

Mr Deo said, “USP has allowed me to pursue my passion in engineering and allow myself not only to do better in my field of study but to push the boundary to be great.”

“We started our USP academic pursuit together as engineering students back in 2019 and we have always worked well together. However, I believe that our friendship that began way back when we were in form 5 at Rishikul Sanatan College in Fiji, sets the foundation for our collaboration,” Mr Deo added.

The two challenged themselves in their final year at USP to design an assistive device for the visually impaired that could detect objects and compute the details to produce an audio text output that could allow those with low vision to manoeuvre their way easily.

“When the listing of the final year project was released, we decided to pursue this particular one simply because we want to stamp our mark.

It took us one whole year, working through some weekends and late nights but the most important part of it all was research,” Mr Deo remarked.

Mr Deo added that “when the project started, it was simply an idea from the outlook. Throughout 2022, we did extensive research about the aspect of this project and how we were going to execute it. We have to do a lot of coding, there were errors at times, so we had to go back to further our research and fix it.”

The two added that the success of their project wouldn’t have been possible without acknowledging the challenges they faced throughout its entirety.

Mr Prasad said, “some of the challenges I faced while carrying out this project was staying back late in uni especially when I found program bugs so a lot of time and effort went into debugging the codes but we overcame this with the help of our supervisors and online resources.”

“But, we felt a sense of relief and pride since we knew that this project had various applications apart from just detecting objects in the surroundings and also how difficult it was to design a fully functional device,” he added.

The two students were also part of the group of four that scooped the Tokyo Electron Award at the 2022 Asia Pacific Robocon that was held in India.

“My USP experience wouldn’t be complete without embracing the various cultures and Pacific people that are part of our regional institution.

I am grateful to be part of an institution that embraces our Pacific culture and one that is now being recognized for its unique research,” Mr Prasad said.

Mr Deo also added that “USP and its regional members’ culture fascinate me. I’ve built an extensive network of friends with my regional buddies from Solomon Islands, Vanuatu, Samoa, and many other Pacific member countries.”

The two that will be graduating this year are advising students and those looking to pursue tertiary studies to pursue their passion at USP and challenge themselves not only to do better but to be great students and help take the institution to new heights through hard work and research.