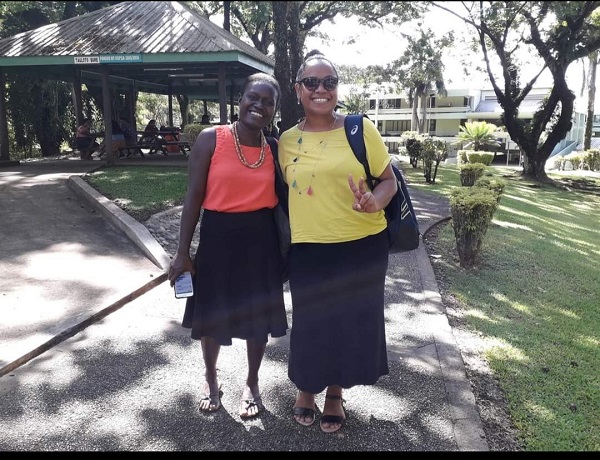 Rosalie and Kalesi at the USP Laucala Campus.

Kalesi Nainoca and Rosalie Nongebatu struck a special friendship almost immediately after they met while studying at The University of the South Pacific’s (USP), Laucala Campus.  This special bond drove them on to attain excellence in their studies.

Supporting each other during their academic journey led them to achieve gold medals after completing their studies last year.

“It was one woman empowering the other to be successful,” Kalesi said while describing the two’s friendship through university. Rosalie is from the Western and Choiseul Provinces in the western end of the Solomon Islands.

The women were inspired by their challenges, various experiences, and motherhood to further their studies. Their commonalities became the reason behind their close friendship.

“Being a mother inspired me to take up the Psychology programme because I believe mothers have been active in making social problems visible and bringing about change,” Kalesi said.

“Rosalie and I took Politics courses together as she was also a mother who had to leave behind her family to be in Fiji. It was during our classes that we began inspiring each other, and from the outset, we were both determined to succeed.”

She added that at USP, students were exposed to many opportunities and an environment to make new friends from students across the region.

“Having good peers can help you achieve success as they will want you to soar. We must give each other wings to soar higher in our academic studies.” As for Rosalie, Kalesi provided her with the support she needed especially since she was away from her family during her studies.

“I am really thankful and so blessed to have come across friends like Kalesi. She pushed me to study hard as it was not easy for us being mothers and having to juggle our studies and family,” she said.

“We stood by and supported one another to get through and deliver what was required of us. We must surround ourselves with people who have the same motivation and drive for success.”

The women also hope the tale of their friendship would empower other women pursuing their academic studies to achieve great success.