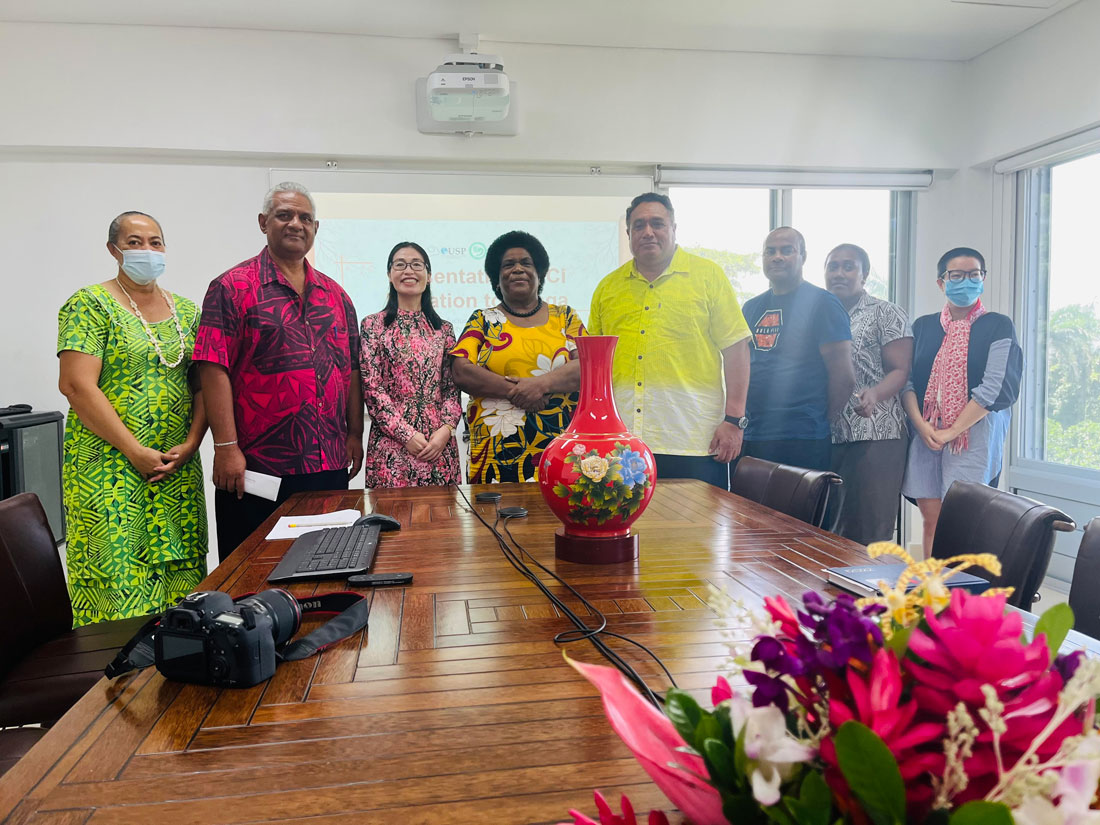 As part of the Chinese New Year and Spring Festival Celebration for 2022, The University of the South Pacific Confucius Institute (USP-CI), Directors, and staff generously contributed towards the Tonga Relief Appeal.

In presenting the donation, the Local Director for USP-CI, Dr Akanisi Kedrayate, articulated that Spring Festival is a time of joy, feasting, goodwill, and sharing gifts with friends and loved ones.

She said staff felt that it was important to particularly remember our colleagues, students, and Tongan community suffering from the effects of the volcanic eruption and tsunami on 15 January.

She said we could not imagine the shock, fear, and trauma the people must have gone through during the period of the disaster, and while we were all shocked at the news and could ‘only pray for their protection, it was also important to show love and care in some concrete ways.

They both expressed their sincere gratitude and appreciation for the kind gesture and generosity of the Directors and staff at USP-CI.

Dr Paunga remarked that he was so grateful for the donation, realising that the Tiger (Chinese Year of the Tiger), while a ferocious animal, has a kind and generous heart!

The donation was to help Tongans affected by the volcanic eruption and tsunami in Tonga on 15 January. The Tonga-Hunga Ha’apai volcano erupted off the coast of Tonga in the South Pacific Ocean and generated a giant and ferocious tsunami that triggered tsunami alerts around the world.

While fortunately, there were only a few deaths, according to the Tongan government’s second update after the volcanic explosion, the volcanic ash and tsunami devastated Tonga and affected 84 per cent of the country’s population.

Dr Kedrayate further added that the USP community has always responded during such disasters not only in Fiji but also in the region to show that we are an institution that not only prepares our students to be well educated and outstanding graduates but also have hearts that are truly human and care for others. Individual staff also contributed towards the disaster appeal.

“It’s critical to support one another during trying times to overcome difficulties and respond meaningfully to needs but also give hope for the future,” she added.

Mr Finau thanked the staff of CI for the generous contributions and expressed his appreciation for the buckets of biscuits and water donated by the people of Fiji and staff at USP that donated to API Tongan Community Hall.

Fijians are putting together what they can at the API Tonga Multipurpose Hall to send across Tonga for those affected by the disaster.

Mr Finau expressed his solidarity with the Tongans, and he was delighted to receive assistance for his people.

He is confident that the strong relationship between Tonga and Fiji continues.

USP- CI also celebrated its spring festival by awarding prizes to the students and staff who participated in the online quiz. There were 50 participants in this quiz. The quiz consisted of 15 questions about the Chinese New Year, with seven rewarded with a prize.

The top prize was given to the Manager of the Disability Centre, Mr Alfred Anthony.