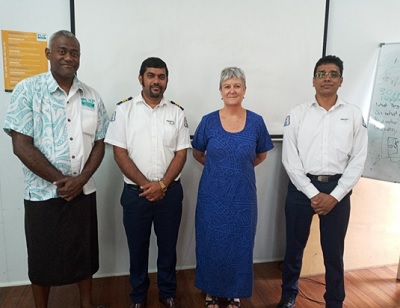 PacMAN stakeholder consultation meeting for USP and Senior Officers from the Biosecurity Authority of Fiji. Mr. Joape Ginigini (local project manager is on the far left and Dr. Gilianne Brodie is 3rd from the left).

The University of the South Pacific’s (USP) Institute of Applied Sciences (IAS) is the key Pacific research partner in a new research initiative on Marine alien invasive Species (AIS).

PacMAN is led by UNESCO’s Intergovernmental Oceanographic Commission (IOC), in particular, the team behind the Ocean Biodiversity Information Systems (OBIS) in Oostende, Belgium. PacMAN will put Fiji at the forefront of these developments and jump-start a new perspective on marine biodiversity.

The 3-year pilot project in Fiji is expected to develop a desktop decision support tool for marine biodiversity monitoring and biosecurity risk management to expand the use of these tools to other PSIDS.

The project is co-funded by the Flanders Government (Belgium) through the Flanders-UNESCO Science Trust Fund (USD865,000) and the Richard Lounsbery Foundation (USD80,000).

Senior Scientist at IAS  and PacMAN’s local Project Manager , Mr Joape Ginigini said “Our unit at IAS, The Pacific Natural Products Research Centre is excited to work on this new project to further develop its technical capacity through the use of the project’s novel technologies as well as through the scientific and technical support from the international collaborators available to help us deliver necessary innovative and holistic approaches to meet the country and the region’s biodiversity conservation goals.”

Mr Ginigini thanked all the stakeholders and said he looked forward to the continued guidance of the PacMAN advisory board and their commitment to the conservation of Fiji’s unique biodiversity.

Deputy Director of IAS and PacMAN Local Marine Science Advisor, Dr Gilianne Brodie said, “invasive marine species are threats to food and economic security in the Pacific as they can take over areas used for supporting fisheries, in addition to open ocean aquaculture and biological diversity that delivers vital economic services to humans.”

She said that any decreased biodiversity caused by Introduced Alien Species, combined with the cost of managing them in both production and subsistence sectors, can negatively affect people and countries on a large scale via economic productivity loss.

Dr Saara Suominen, Scientific Officer for the PacMAN project at UNESCO said “We envision that building capacity in Fiji and the Pacific Islands in novel molecular methods for biodiversity surveillance will enable the monitoring and surveillance agencies to manage the essential services provided by the marine environment at an unprecedented level. We will perform baseline surveys of marine biodiversity, and additionally, these methods will facilitate the detection of otherwise invisible threats from the changing conditions on our planet.”

General PacMAN coordinator at UNESCO, Mr Ward Appeltans added that he is excited to develop this science capacity in Fiji, building on the local expertise already available and connect the science with society and local authorities.

“If we can make this work, Fiji will be one of the first countries in the world that has a marine invasive species detection system using the latest advances in molecular biology,” he said.

PacMAN is about ensuring biodiversity preservation in Pacific Island marine ecosystems for their sustainable utilisation by humans of its many economic and ecosystems services.

Invasive marine species are also threats to native plants and animals in marine areas and are most likely to be introduced via shipping and hull fouling. Reduced native biodiversity and negative effects on natural ecosystems’ functioning can alter benefits from local services such as fresh food diversity, water quality, pathogen reduction for human health and centuries-old medicinal species that can affect production and cultural harvests in communities.

The complete list of collaborative partners is available on https://pacman.obis.org/partners