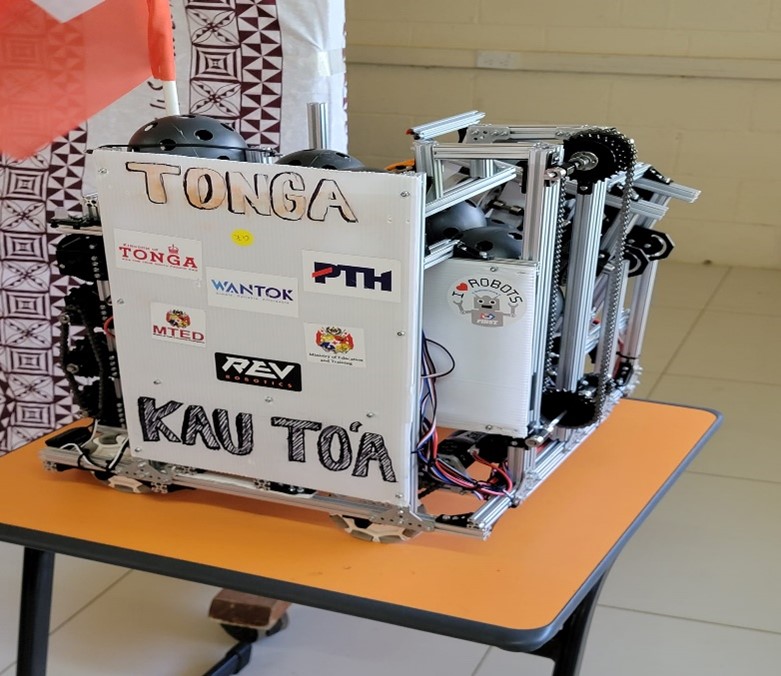 The robot creation that won the Silver Medal

The University of the South Pacific (USP) Tonga Campus sent a team of five students and two staff members to represent USP at the First Global Challenge 2022 – A Robotic Competition in Switzerland, Geneva.

Team KAU TO’A from USP who represented Tonga in the First Global Challenge competed alongside 180 other countries from across the globe. The team created a robot targeting the theme of Carbon Capture. KAU TO’A’s robot was created to highlight a way to positively contribute to the effect of Climate Change.

According to studies, the accumulation of Carbon dioxide in the atmosphere thickens the greenhouse layer so it traps heat and causes global warming. The theme of the game was to use robots to capture carbon to solve global warming which is a solution to climate change. The challenge provided an opportunity for young people across the globe to leverage the power of technology and use their knowledge and abilities to tackle the planet’s most pressing challenges. The pressing challenge they focused on was ‘Carbon Capture’ and Team KAU TO’A won a silver medal for their outstanding and precise performance.

This project was based on STEM (Science Technology, Engineering & Mathematics) where the team’s task was to plan, design, and build a robot to “collect” the carbon and “store” in a collecting chamber, 2.5m high, in the centre of the playing field. Students also gained knowledge and experience in this field.

“We are all proud of them and everyone is a winner – USP and Tonga! It was a testimony to the true and great potential our students have especially in STEM. Our students don’t have to be in a fully-fledged developed country. All they need is the right support and the right people to bring such talent to the fore. We are grateful to all the local sponsors let alone the organisation that runs the annual event,” Dr Havea added.

Team Vice Captain, Mahonilai Molianikama Hakaumotu said, “This achievement means a lot and is a step toward changing my life and closer to achieving my dreams of becoming a Civil Engineer.”

“We got through only by working as a team and helping each other and through all our work we put God first throughout our journey of making the robot,” Hakaumotu added.

Upon their return, their parents prepared a special lunch gathering at the Tonga campus and invited all the sponsors as a token of gratitude for their kind donations towards the event.

Meanwhile, the Prime Minister of Tonga, Hon. Hu’akavameiliku hosted an appreciation lunch with the team at the Water Front Restaurant. Campus Director, Dr Robin Havea with the two staff members that accompanied the team also attended.