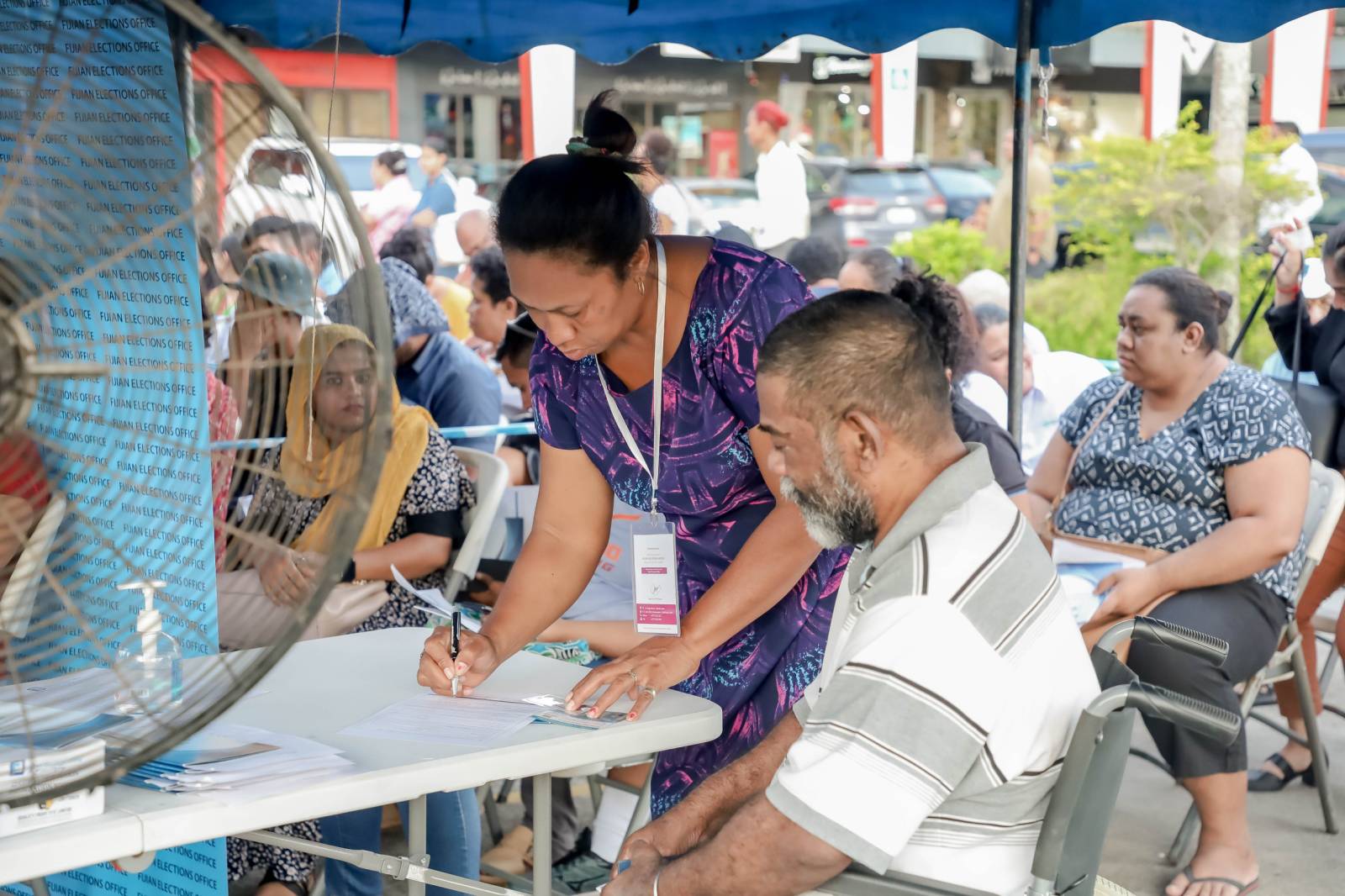 Voters turned up in numbers at various registration venues to register and update their details on their VoterCards. Picture: SUPPLIED/FEO

By AKANSHA NARAYAN and CINDY CHAND

More than 8,500 voters made a last-minute dash to various registration venues on Monday to register and update their VoterCards before the official close.

Supervisor of Elections Mohammed Saneem confirmed in a statement they received 9,608 engagements from voters on the final day of registration for the 2022 General Election while an estimated 8,579 Fijians upgraded their VoterCard details and 1,029 new registrations were made.

Since October last year, the Fijian Elections Office team had engaged more than 300,000 people with just over 85,000 Fijians holding on to the expired green-coloured VoterCard.

“Even though it was last minute on Monday, voters rushed to the registration venues which shows that they have a high level of commitment and huge interest in the politics of this country.

“They will decide who will govern the country for the next four years. By this time in the third election, there would have been a lot of people who would have validly registered to the blue-coloured VoterCard but disappeared because they’ve now moved their address or they’ve changed their details, or have not updated their VoterCard. On election day, they will be the most disappointed people in the country,” he said.

Mr Saneem said the fruits of this would be visible when voters go to the polls on December 14 with their blue VoterCard.

“Your VoterCard confirms that you will be voting. Your name will be on the list and you will be able to vote. The biggest task remains, you have to come back to vote,” he encouraged voters.

Meanwhile, Mr Saneem said the Fijian Elections Office would continue with its preparations for the general election.

“We have conducted two extensive nationwide voter registration drives as well as several targeted ones in between and deployed teams to the rural and maritime areas, to urban hotspots, conducted house to house visits, setup teams in settlements and communities’ weekend after weekend,” he said.

Mr Saneem thanked the venue owners who allowed them to use their premises and the agencies who assisted them.

“For the first time in the past eight years, we have managed to also set-up registration centers in our Fiji missions overseas and Fijians in those countries were able to access voter services directly in those High Commissions and embassies,” he said.

Mr Saneem also added that Fijians who have missed out the registration drive and were still registered could vote through postal voting by visiting their website and downloading the form, filling it and uploading it for vetting.

“We received 91 postal voting applications, in which 40 were processed and approved.”

The FEO is expected to release the provisional voter numbers for the 2022 General Election after the consolidation of their data.

Mr Saneem urged all Fijians to check their polling venue by texting their VoterCard on 1500 to confirm where they would vote.

*Akansha Narayan and Cindy Chand are final-year journalism students at The University of the South Pacific. They are part of the Wansolwara News team covering the 2022 General Election in Fiji. Follow us on Facebook@Wansolwara and Twitter@USPWansolwara for election updates.