Nomination of candidates for Fiji election open until November 14 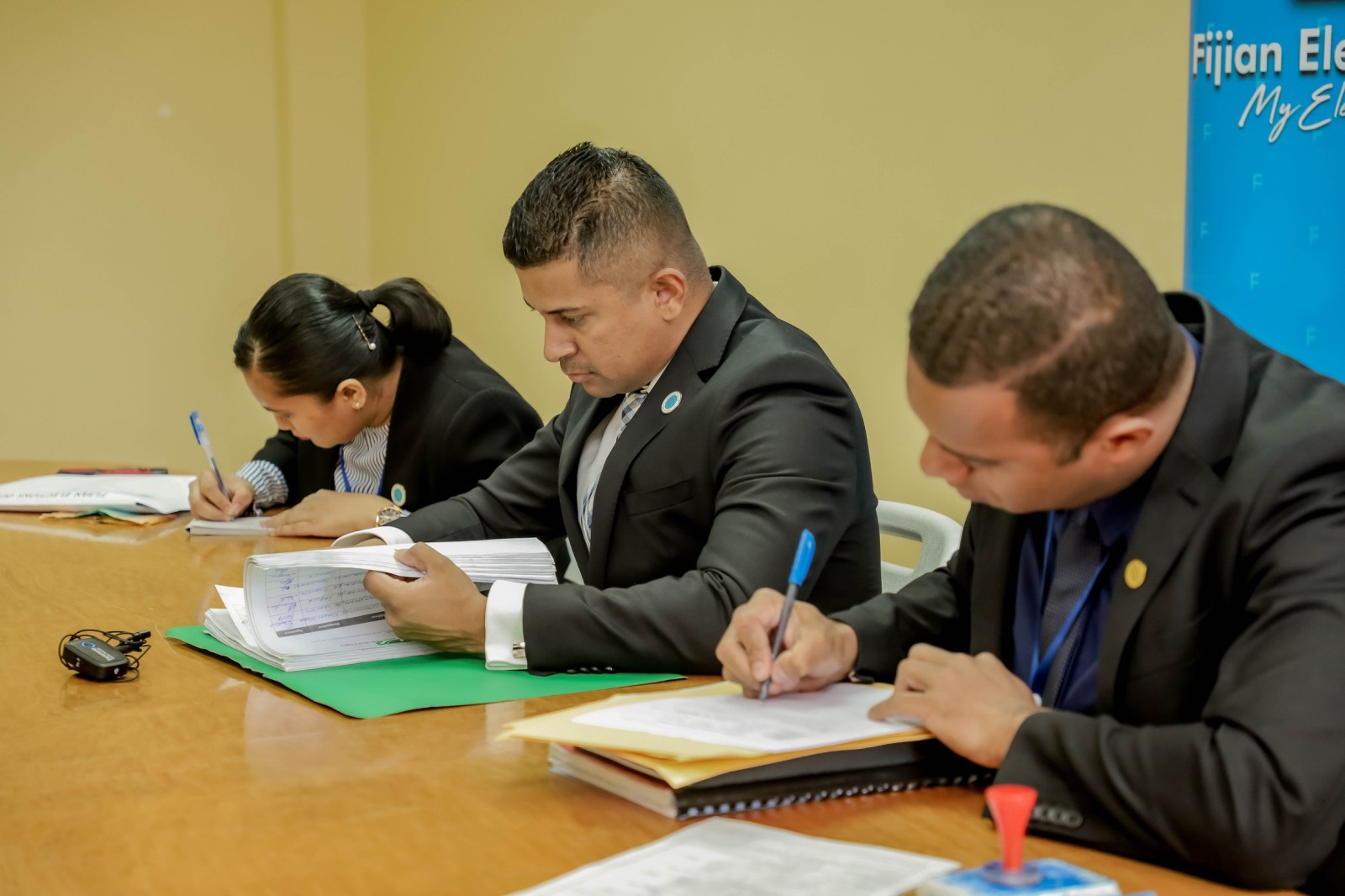 Supervisor of Elections Mohammed Saneem (middle) receives an independent candidate nomination at St Stephen’s Building in Suva last week. On Saturday, he issued a statement rejecting the nominations from two independent candidates after they failed to meet the minimum requirements stipulated in Section 27 of the Electoral Act. Picture: SUPPLIED/FEO

The nomination of candidates for Fiji’s 2022 General Election is open until 12pm November 14 as those intending to nominate or contest the election are urged to ensure their candidate nominations are delivered to the Fijian Elections Office before the deadline.

While announcing the opening of the nominations of candidates from 8am November 1, Electoral Commission chairperson Mukesh Nand said there were two types of nominations.

“The amount has to be in Fijian currency and has to be a bank cheque or legal tender. Personal cheques, political party cheques, M-PAiSA, or any other form of payment will not be accepted.”

Mr Nand said any candidate who wished to withdraw his or her nomination form, could do so by providing a written notice to the Supervisor of Elections no later than 12pm on November 15.

“Once the Nominations Period has ended, the Supervisor of Elections will proceed to vet all applications and decide whether an independent nomination or party nomination has met all the criteria in order to be approved as a candidate for the 2022 General Election,” he said.

“The approved List of Candidates for the 2022 General Election will then be displayed at the place of nomination.”

He said objections to any candidate nominations and appeals to the decision of the Supervisor of Elections must be received by the Electoral Commission no later than 4pm on November 15.

Once these requirements have been met and any objections and appeals appropriately dealt with, Mr Nand said the FEO would proceed with the National Candidates List Ball Draw to allocate individual numbers to approved candidates.

On November 2, the FEO received the first nomination by an independent candidate for the 2022 General Election.

Supervisor of Elections Mohammed Saneem said there were no independent candidates in the 2018 General Election and this time, there appeared to be a greater confidence in the electoral platform and greater interest among individuals to participate in the electoral process by becoming candidates to contest the election.

Three days later, Mr Saneem issued a statement noting that the nominations from the two independent candidates that had been filed earlier in the week were rejected after failing to meet the minimum requirements as stipulated in Section 27 of the Electoral Act.

The FEO has extended its opening hours from 8am to 6pm to accommodate any person who may wish to file a nomination later on in the afternoon after close of business.

Mr Saneem said more nominations were expected towards the close of nomination date.

*Leila Parina (Papua New Guinea) is a final-year journalism student at The University of the South Pacific’s Laucala campus. She is part of the Wansolwara News team covering the 2022 General Election in Fiji. Follow us on Facebook@Wansolwara and Twitter@USPWansolwara for election updates.