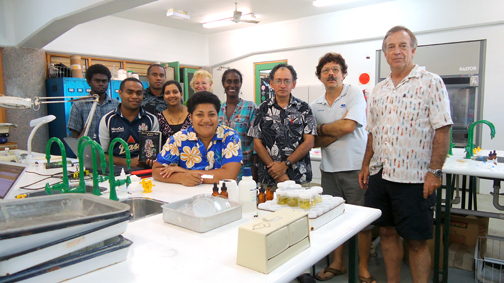 A workshop on algal taxonomy was held at the Institute of Applied Sciences based at the University of the South Pacific from 14-16 August 2012. The three-day workshop, organized by Mr Klaus Feussner and Dr Katy Soapi, was attended by staff members from IAS, the School of Marine Studies and Georgia Institute of Technology, Atlanta in the United States.

The main aim of the workshop was to train marine biologists in the identification of common tropical marine algae (seaweeds) occurring in the Pacific Islands region, a skill useful when doing surveys, undertaking scientific research, looking for natural products, doing biodiversity assessments or environmental impact assessment.

Seaweeds are important primary producers and the base of the food chain, providing food to many other marine species (e.g. fishes, invertebrates and turtles). At least seven different species of seaweeds are consumed in Fiji and Rotuma, the most common ones being the genera Caulerpa, Gracilaria, Hypnea and Meristotheca. Participants were shown some of these species and trained how to identify them including many more that are commonly found on coral reefs around the Pacific region.

The instructor, Dr. Antoine De Ramon N’Yeurt, of PACE-SD, an expert on algal taxonomy in the Pacific region, discussed the importance of seaweeds as indicators of the health of marine ecosystems where a predominance of seaweeds is an indicator of poor reef health in the tropics. He also highlighted other major disturbances that lead to algal dominance such as increase in nutrients, over fishing of herbivores, tropical cyclones and warmer climate. Seaweed dominance can also act as indicators of climate change, their sensitivity to seawater temperature and migration southwards as the climate becomes warmer, are early warning signs of global warming, he said.

Participants also had an opportunity to get some hands-on experience in identifying algae samples collected from the Nasese foreshore and samples from the Solomon Islands collected from a field expedition in March earlier this year. One of the participants, Professor Mark Hay thanked the instructor and organizers for arranging a good algal taxonomy workshop adding that he enjoyed it and learned a lot. Professor Hay and his team are working with IAS to find new drugs from marine algae and a red alga from Fiji has shown very strong antimalarial potency.
The workshop ended with the instructor, Dr. N’Yeurt thanking the participants for their enthusiasm and keen interest in learning about algae and their identification, followed by presentations of certificates to the participants.