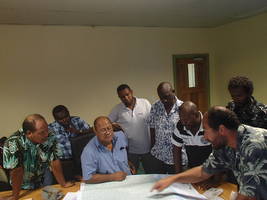 Plans are underway to mount an expedition next year into the mountains of Guadalcanal, in what will be a landmark in the history of Pacific biodiversity research. The expedition is being coordinated by the South Pacific Regional Herbarium of USP, and will comprise taxonomic experts from the Pacific and around the world, working together to document the flora and fauna of one of the world’s most biologically diverse areas.

The highest point on the island of Guadalcanal is Mt Popomanaseu. Standing at 2335m the spot marks the highest landmass between South America and Papua New Guinea. The forests that cover this peak and the surrounding uplands contain biological communities characterised by high endemism, and in which there are potentially many species that have never been recorded by scientists before.

USP is partnering with the American Museum of Natural History (AMNH) and the Solomon Islands Community Conservation Partnership (SICCP), to plan and implement the project, which is being funded primarily by the Critical Ecosystem Partnership Foundation (CEPF).

At a planning meeting in June of this year project stakeholders met in Honiara to begin preparations for this historic expedition. At this meeting staff from the three project partners (SPRH, AMNH and SICCP) met with Solomon Islands government and provincial officials, NGOs, landowner representatives and staff of the Solomon Island National University. The expedition is scheduled to take place over a period of four weeks in June 2015. International taxonomic experts will work in collaboration with Solomon Island and other Pacific-based taxonomists to identify and catalogue the biological richness of this globally unique site.