IAS Director recognised by the Institution of Engineers Australia 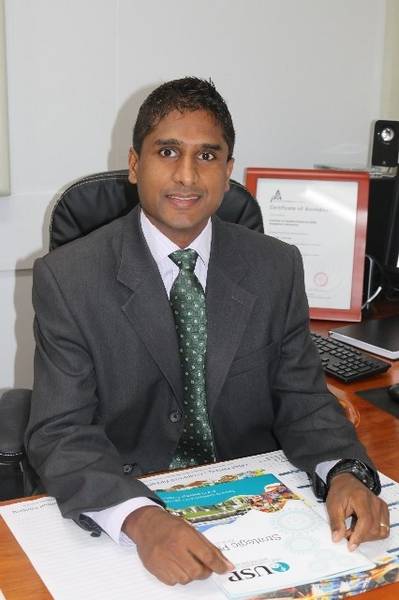 The Director of the Institute of Applied Sciences (IAS) of the University of the South Pacific (USP), Dr Johann Poinapen, has been elected to the grade of Fellow by the Institution of Engineers Australia, which is the trusted authority of the engineering profession in Australia. This recognition honours engineers whose skills are recognised as having served the Australian nation and the world for many years in the fields of engineering. Fellows are recognised as the leaders of the industry. They are seen as an elite group of engineers who represent the highest standards of technical and professional excellence. The grade of Fellow also signifies that the person has the expertise to make a difference to the engineering profession and its next generation of practitioners.

Dr Poinapen has 20 years’ experience in the water and environment sectors in developing and developed countries. He has contributed to many high profile and technically challenging engineering projects beneficial to the public and private sectors as well as communities. He has also served in engineering national leadership roles in Australia. He is a Chartered Professional Engineer in both the Chemical and Environmental Engineering colleges with Engineers Australia. He is also a Registered Professional Engineer which is a legislated title awarded by the Board of Professional Engineers of Queensland. His water engineering expertise is very well respected and sought by the region and globally. His experience in water and environmental engineering has led to his appointment since 2012 as a panellist assessing chemical engineering candidates seeking Chartership with Engineers Australia. In Fiji, Dr Poinapen also serves as a registered EIA principal consultant which he says is essential for the work of IAS in Environmental Impact Assessment projects.

Humbled on receiving the letter from Engineers Australia about his election to the grade of Fellow, Dr Poinapen kindly expressed his gratitude to opportunities given to him in the course of his engineering and managerial career by many employers, including USP and IAS. He also thanked people who have contributed in one way or another to enable him to receive this honour. He stated that “Many people have over the course of my life played an important role in supporting me in my endeavours. My family has been my bedrock and has encouraged and supported me all the way. I remember the many weeks and months spent away from home working on remote project sites within and outside Australia providing sustainable water and environmental engineering solutions”.

He also shared “when I received the letter about this honour, it caused me to reflect on all that I have done and achieved over the last two decades, the learning generated on this journey and then to carry on!”.

He then smilingly said that he is now entitled to use the postnominals of FIEAust, CPEng, NPER, APEC Engineer, IntPE(Aus), RPEQ (see meaning below).

Dr Poinapen was also a recipient of two awards in 2008 by the Water Institute of Southern Africa for his contributions to research in water and wastewater in South Africa. He is currently leading the efforts to establish a Pacific Water Centre at USP, which will assist in enhancing capacity in water and wastewater management in the region.

His work in environmental protection from chemical contaminants has led to his election to serve as a member of the Global Coordination Group and the Asia-Pacific representative for the global monitoring of Persistent Organic Pollutants (POPs) under the Stockholm Convention which is a global treaty to protect human health and the environment from POPs.

His Fellow certificate will be presented to him at a special ceremony organised by the Institution of Engineers Australia.