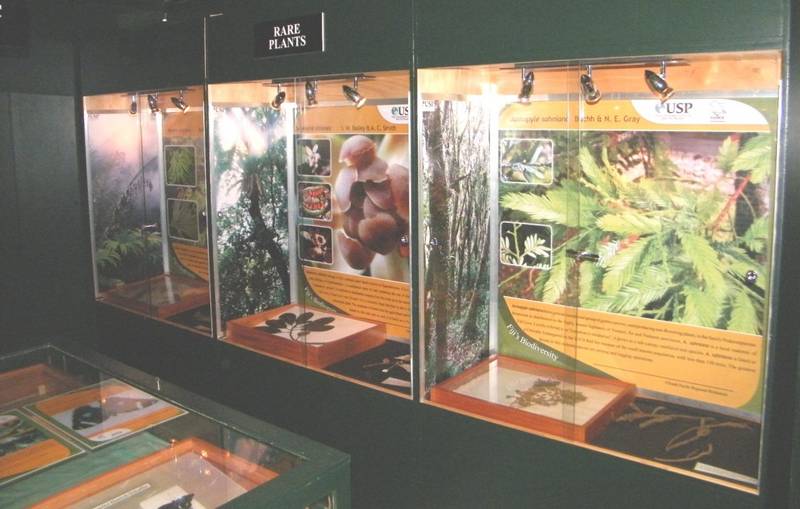 The Institute of Applied Sciences (IAS), USP launched Fiji’s first NATURAL HISTORY GALLERY housed within the Fiji Museum on Tuesday 28th September, 2010. The Chief Guest for the Opening was the British High Commissioner to Fiji, Mr. Mac McLachlan. The event was well attended by dignitaries in the area of conservation and biodiversity in Suva, administrators of USP including the Vice Chancellor, Prof. Chandra and the project leader from the University of Sussex, (UK) Dr. Alan Stewart.

The Fiji Natural History Gallery (FNHG) is a result of a project collaboration between USP and the University of Sussex, UK under a Darwin Initiative (UK) fund which began in 2006 titled: “Focus for Fiji: Insect Inventories for Biodiversity Assessments”. The FNHG serves as a project milestone to create general awareness on the significance of Fiji’s unique biodiversity which includes educational information and specimen exhibition for some of Fiji’s unique taxa for the general public.

The FNHG holds a representative collection of Fiji’s unique marine and terrestrial fauna and flora. This collection is unique in that most are endemic to Fiji, some critically endangered under the IUCN Red List whilst a few others are extinct. Most of these species have cultural significance where some are ‘totems’ for certain clans in Fiji such as the larva of the giant long- horned beetle, Xixuthrus heros, locally known as ‘yavato’ and the burrowing snake, Ogmodon vitiensis, (a member of the cobra family) locally known as ‘bolo’.

The various groups represented within the FNHG include: Marine Life (fishes, corals and invertebrates), Freshwater Life (eels and fishes), rare and endemic Plants and Insects (beetles and butterflies), some endemic Birds (both terrestrial and seabirds), native Bats and some endemic Reptiles (iguanas, snakes, skinks and frogs). Most of the species exhibited in this gallery represent the uniqueness of Fiji’s biodiversity. For example, the plant Acmopyle sahniana in the family Podocarpaceae is very rare and predates the dinosaur era and Degeneria vitiensis in the Family Degeneriaceae (an endemic family) is considered to be an ancestral family of some flowering plants in the world; the giant long-horned beetle,  X. heros is the world’s second largest beetle and is endemic and rare; Fiji’s only endemic bat, Mirimiri acrodonta, a single- island endemic which has been only recorded so far from the island of Taveuni and is critically endagered under IUCN Red List; the iconic iguana Brachylophus vitiensis which is listed as critically endangered under IUCN Red List and endemic to the western Fiji islands and some of Fiji’s now extinct shells such as worm shells and the horse’s hoof.

In his opening speech, Mr. MacLachlan mentioned that “most of us miss the depth of the biodiversity within the ecosystems in which we go about our daily lives. I for one, am keen to get a glimpse tonight of the giant long-horned beetle – the equivalent to the second row forward of the beetle world – making his debut tonight, and to seeing some of the other endemic marine and terrestrial examples here on display.  This is all part of the Fiji that we would not otherwise necessarily experience”.

Furthermore, Mr. MacLachlan added that, “the reason why the awareness and protection of biodiversity is so important is more than just for our own awareness or aesthetic pleasure. Imagine the opportuninty cost to humanity of dramatic changes to our biodiversity. Think about the role biodiversity has in purifying our air and our water. How it contributes to our medicines, 80% of medicines used in the U.S.A originate from nature and our sustenance”.

Most of these unique terrestrial species are currently faced with threats mainly due to clearance of forest trees (i.e. habitat loss and forest fragmentation) for agriculture, logging, mining operations and for human habitation. Predation on eggs, larva and juveniles of some threatened animal species namely by feral cats, mongoose and rats is also another major contributing factor to their survival. The FNHG will therefore serve as an awareness tool for the people of Fiji to learn and better appreciate more of our endemic fauna and flora and hopefully learn to take more responsibility into protecting and conserving Fiji’s natural heritage.