IAS’ Pacific Natural Products Research Centre carry out third Free Prior and Informed Consent for research and marine sample collections in the Tikina of Ono, Kadavu 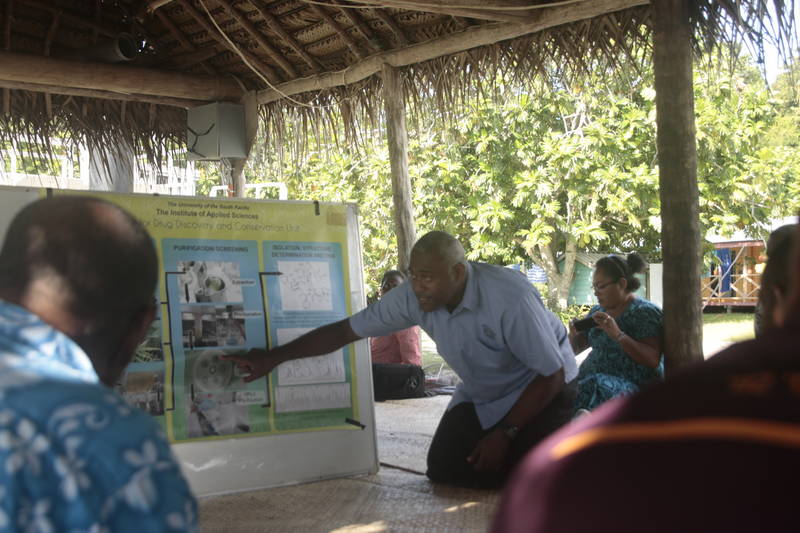 The Institute of Applied Sciences’ Pacific Natural Products Research Centre (PNPRC) and Environment Unit recently held the third Free Prior and Informed Consent (FPIC) awareness workshop under the Global Environment Facility-Access Benefit Sharing (GEF-ABS) project with government stakeholders in the Tikina of Ono, Kadavu from 21-23 February 2018. The project is being implemented as part of Fiji’s commitment under the Nagoya Protocol on Access to Genetic Resources and the fair and equitable sharing of benefits arising from their utilization.  The government GEF-ABS project stakeholders included the Ministry of i-Taukei Affairs (MTA), Ministry of Environment (MoE), and the Ministry of Fisheries (MoF).

The FPIC workshop aims to establish participation and consultation with resource owners prior to using or having access to the resources in their coastal waters.  Resource owners were provided awareness about the impending research work to be conducted particularly the collection of marine samples for bioprospecting and drug discovery research. Awareness was also raised about the Nagoya Protocol on Access and Benefit Sharing and for communities to manage their biological resources to ensure that there is fair and equitable sharing of benefits arising from the use of their genetic resources.

The project team first visited the island of Dravuni for a workshop with the communities of Dravuni and Biula under the Tikina of Ono. Having spent one night on Dravuni Island, the team then went on to Nabouwalu village where they conducted the same FPIC awareness for the villages of Nabouwalu and Naqara before travelling by boat to Narikoso village where another workshop was held. The third day of the trip was spent in Narikoso village where the FPIC delegation had the opportunity to rest and indulge in the beauty of Kadavu. By Friday evening, the team travelled by boat to the village of Vabea, where Nawaisomo representatives also joined in the FPIC awareness. The Kadavu FPIC concluded in Vabea village and the team spent the night there and departed for Kavala village the following morning to return to Suva.

The PNPRC manager Dr. Katy Soapi acknowledged the key partners of the project, the Ministry of Environment, the Ministry of Fisheries and especially the Ministry of i-Taukei Affairs for their support in facilitating and organising access to the communities. She added that the outcomes of the GEF-ABS project will directly impact scientific research work undertaken by IAS, particularly for bioprospecting and drug discovery research. She further added that IAS has been sharing the types of research undertaken with both the government and the communities as part of the national ABS discussion so they are aware of the long process of drug discovery. During the workshop, consent forms were distributed and explained in the Fijian vernacular. Communities were then given time to digest the information and to return the forms with their consent when ready.  The feedback from communities has been positive as the government works torwards formulating ABS guidelines for Fiji under the Nagoya protocol.

The IAS Pacific Natural Products Research Centre has since 2001 been involved in bioprospecting work on marine and terrestrial organisms and plants and has been a recipient of a number of grants due to its success in past and present collaborative research.