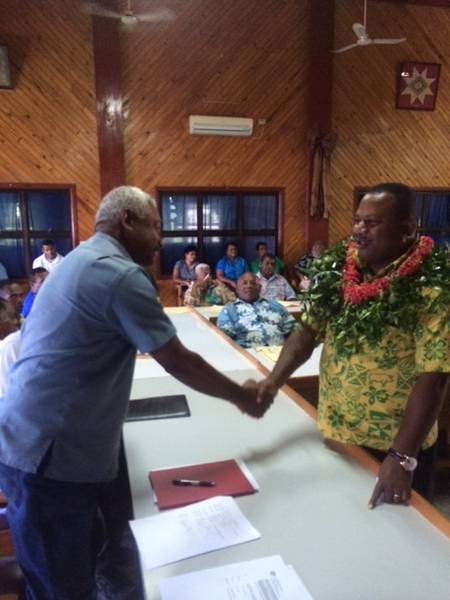 The Manager of Laboratory Services at the Institute of Applied Science (IAS) Mr. Usaia Dolodolotawake attended a Kava Stakeholders Meeting on the 14th of April, 2014 in Levuka, Ovalau. The meeting was organized by Pacific Elixirs Ltd., producers of Taki Mai, a bottled kava drink co-developed by IAS. The meeting was attended by Ovalau kava farmers, provincial administrators and Ministry of Agriculture Officials including the Hon Minister, Mr. Seruiratu.

During the meeting, Mr. Dolodolotawake gave an overview of IAS’s activities and its role in Taki Mai development with Pacific Elixirs. He shared with those present the link between cultivar and the variation in the amount of each of the six major kava lactones present. This is referred to as chemotype. Since Pacific elixirs will only buy certain chemotype (variety), it is important that farmers were aware of this and ensure that they propagate the desired variety should they intend to supply Pacific Elixirs.

Another contentious issue clarified was the price of a kilo gram of green kava currently   being offered at farm gate by Pacific Elixirs ($7.00 per kg versus $25.00 per kg dry kava sold to other buyers). Mr. Dolodolotawake explained that based on work done at IAS and by others the average moisture content of 3 years kava roots is around 80%. This meant that if a farmer took 10kg of green kava and dried it, he will have around 2kg of dried kava which equates to more than $30.00 per kg.

During the “talonoa” session, Mr Dolodolotawake had talks with the Minister who was quite aware of the activities of IAS and was appreciative of our role in helping value add an agricultural commodity. The farmers were also happy with the scientific based discourse that was delivered.