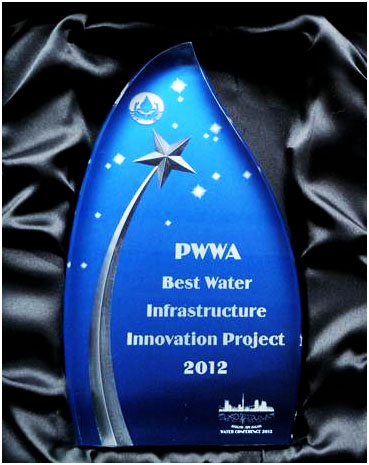 The Pacific Water and Waste Association recently awarded the 2012 prize for Best Water Infrastructure Innovation Project in the Pacific to a project initiated by the Institute of Applied Science (IAS) at the University of the South Pacific at a ceremony held in Auckland.
This was for a water and sanitation project for Votua village, Nadroga. Studies by IAS around 2000 had shown very high nutrient levels in the coral reefs along the Coral Coast which have contributed to algal overgrowth of coral in many places.

Working with the New Zealand National Institute of Water and Atmospheric Research (NIWA), a study was undertaken which showed the nutrients came mainly from human and pig waste. A number of initiatives such as waste composting and development of wetlands were undertaken to retain the nutrients on land.

Based on early successes the NZ government funded NIWA to work with IAS to build a large wetland that would treat all septic tank outflow in Votua Village before the purified waste water was discharged into a village stream. In early community meetings the urgent need for an improved water supply was noted which was achieved via an AUSAID climate change adaptation project to improve water supply. The wetland system was completed in 2010 ; as much as 90% of the nutrients are removed by the wetland.

Such projects are complex, noted Dr. Chris Tanner, the NIWA project leader. It could only have been successful with the hard work of the Votua people over four years and especially their Water Committee and Community leader Ratu Kini Ravonoloa, resident development and conservation leader Victor Bonito of Reef Explorer, Fiji , and Viliame Jeke who served as water engineer and community liaison person. NZAID have approved additional funding to work with IAS to simplify the wastewater management approach and apply it to addition communities with similar problems.