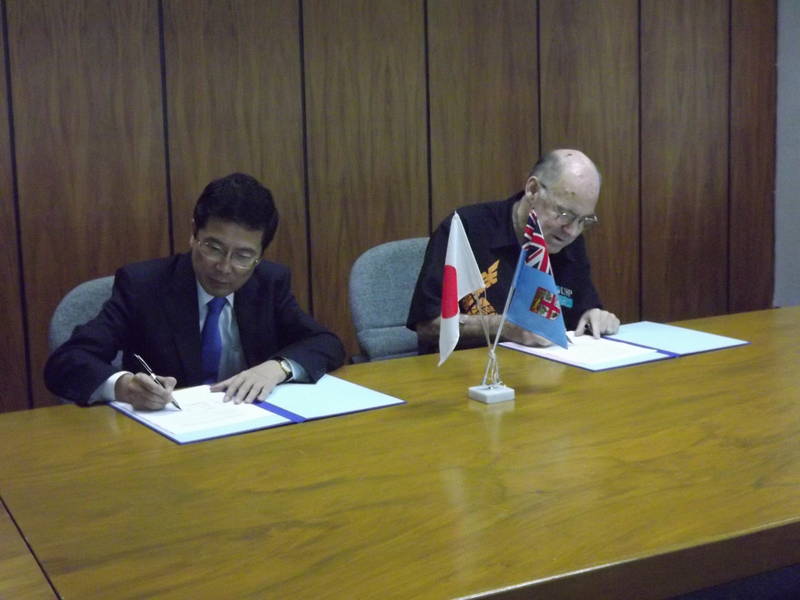 The Institute of Applied Science of the University of the South Pacific signed a grant contract agreement with Embassy of Japan in the Republic of Fiji on the 22nd of March 2013 for the improvement of sanitation environment in Ucunivanua Village, Tailevu. The director of IAS Professor William Aalbersberg and the Japanese Ambassador to Fiji, His Excellency Mr. Eiichi Oshima signed on the agreement available under the Japan’s Grant Assistance for Grassroots and Human Security Project scheme.

The sanitation project is for capital infrastructure improvement in the Ucunivanua water supply and increasing the communities’ awareness of waste management and to construct effective management demonstrations to address liquid waste issues to the coastal marine systems. The demonstrations include the construction of compost piggery and grey water treatment. Solid waste will also be addressed via the 4R concept – Reduce, Refuse, Reuse and Recycle. The project is set to be accomplished within a year.

Attending to and witnessing the signing, were the traditional chief of Ucunivanua Ratu Timoci Vesikula; his village headman Mr Manoa Tikomaimaleya; the technical support for the project Mr Viliame Jeke and the project manager Mr Semisi Meo.