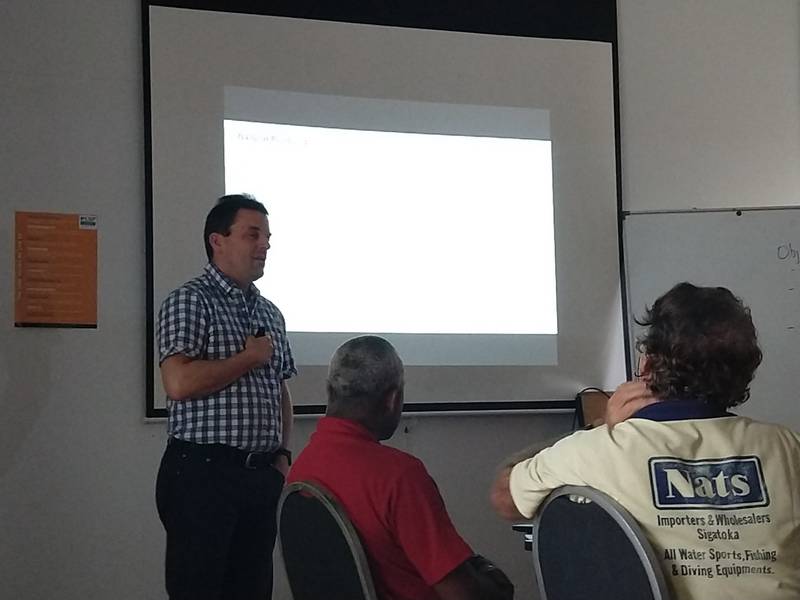 The Institute of Applied Sciences (IAS) staff were treated to two informative presentations on the prolific anti-infectives’ producer Myxobacteria, by Dr Ronald Garcia and Rolf Müller from the Helmholtz Institute Pharmaceutical Research Saarland (HIPS) of Germany on Friday, 17 May at the IAS Conference Room, USP Lower Campus. HIPS is Germany’s first ever public research institute and is committed to the field of pharmaceutical sciences research. The main focus of the institute is the search for new anti-infectives mainly from the Myxobacteria.

In order to realise the diversity of this well-established group of bacteria, the HIPS is working with IAS’s Pacific Natural Products Research Centre (PNPRC) on the search for Myxobacteria from the Marine and Terrestrial environments of Fiji in the aim of uncovering new genera and species which may potentially produce new anti-infectives. As IAS is a member of Fiji’s National Antibiotic Resistance Committee (NARC), this research also seeks to address the rising issue of microbial resistance to antibiotics which is a national and global problem.

Dr Ronal Garcia of HIPS described the biology and ecology of Myxobacteria and how species and genera of Myxobacteria can be identified through their shape and colour of fruiting bodies as observed under a phase contrast microscope at 1000x magnification. He stated that though the majority of the Myxobacteria described species was known from soil samples, metagenomic studies have shown that Myxobacteria also widely exist in the Marine environment.

Professor Rolf Müller of HIPS spoke on the basic microbiology, chemistry and genetic engineering of Myxobacterial strains to produce new or novel antibiotics from microbes. In particular, he described how Myxobacteria, though not studied as much as actinomycetes and bacilli, continues to show promising bioactive properties. He also highlighted examples of novel synthetically produced and genetically engineered natural products in preclinical development at HIPS as potential broad spectrum antibiotics.

The IAS PNPRC Manager, Dr Katy Soapi, said that the presentations was an eye-opener for IAS researchers as it revealed an entire biochemistry research field that IAS could access through the collaboration with HIPS.

These sentiments were also shared by Dr Isoa Korovulavula, Acting Director for IAS who stated that IAS welcomes such partnerships with leading international researchers as it supports the Institute’s endeavours to contribute effectively to the region’s public health issues and also to the body of science.