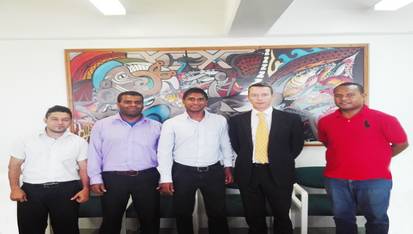 The Institute of Applied Sciences (IAS) was visited by the Fiji Government Permanent Secretary for Infrastructure and Transport Mr Paul Bayly on 30 March 2016 to inspect the IAS Biofuel Laboratory.  The World Bank funded through the Fiji Government Department of Energy Biofuel project involves the establishment of a Biofuel Laboratory and the development and accreditation of biofuel tests.  Accompanied by senior government officials from the Ministry of Infrastructure and Transport, Mr Bayly was shown the ranges of equipment used for biofuel analysis and briefed on the progress of the project.

Commencing in 2012 and with Phases 1 and 2 completed, Phase 3 of the project began in 2016 with an additional F$700,000 for the development of bioethanol tests and accreditation of the remaining biodiesel tests.
Pleased with the project achievements, Mr Bayly said Fiji is well placed to lead the region in Biofuel production aided now by the availability of a testing facility and technical expertise at IAS-USP for determining the quality of biofuel.  The next step he said would be for the Fiji Government to establish the right policies that will encourage overseas investors in the biofuel industry. In that respect, Mr Bayly has kindly requested the assistance of IAS to work with other stakeholders in the development of the National Biofuel Policy.

The Acting Director of IAS, Dr Johann Poinapen thanked Mr Bayly for his Ministry’s support and reiterated USP’s commitment to further collaborate with the Fiji Government in its quest to promote the use of renewable energy in the country and also in the region. Dr Poinapen also shared that with this project and the establishment of the accredited biofuel laboratory, capacity is being built at many levels in both organisations and that we are slowly but surely progressing towards the vision of sustainable energy.