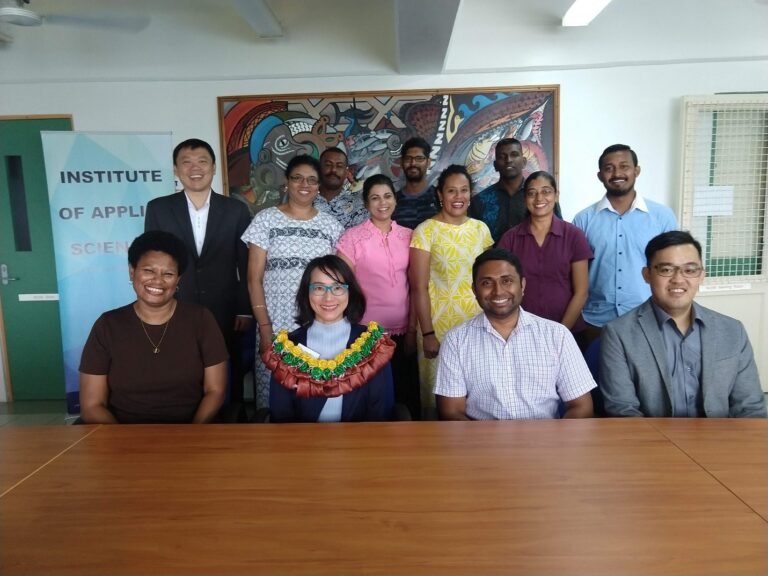 The Institute of Applied Sciences with the assistance of the Asia Pacific Mercury Monitoring Network (APMMN) and in collaboration with the Taiwan (Republic of China) commissioned the region’s first Mercury air sampler on Thursday, 21 November, 2019.  The Head of Mission of the Taiwan (ROC)Trade Mission in Fiji, Ms Jessica Lee, chief guest at the commissioning expressed her delight in IAS, USP’s efforts in collating atmospheric mercury level data.  “The government of Taiwan (ROC) is pleased to support this research work as it had previously supported the Institute in the late 2000s in the area of pesticides monitoring in imported foods in the region,” she said.

A training workshop on the operation of the mercury sampler was also held.  Mr Da-Wei Lin of the APMMN spoke of the importance of mercury levels monitoring and demonstrated how to use the sampler and how the data is interpreted.  He also spoke on the role of the APMMN as a cooperative effort to systematically monitor mercury in air and rainwater throughout the ASIA-Pacific Region.  APMMN collaborators include both the United States Environmental Protection Agency (USP EPA) and the Taiwan EPA.

Mercury, a naturally occurring element that is found in air, water and soil is considered by the World Health Organisation as one of the top ten chemicals or groups of chemicals of major public health concern.   Exposure to small amounts of mercury, can cause serious health problems, and is a threat to the development of the child in utero and early in life.  The toxicity of mercury have detrimental effects on our nerves, digestive, immune systems, lungs, kidney, skin and eyes.

In installing the mercury air sampler at IAS, USP, Fiji will now join countries such as Indonesia, Philippines, Taiwan, Thailand, Sri Lanka and Vietnam where similar mercury samples hosted in providing air mercury levels data to the APPMN.  The monitoring is also done in compliance with the Minamata Convention on Mercury, an international treaty approved by 140 countries.  The treaty was designed to protect human health and the environment from anthropogenic emissions and releases of mercury and mercury compounds.

Dr Vincent Lal, Manager Laboratory Services, IAS elaborated on previous mercury monitoring that IAS had done on fish samples and human hair. “IAS is also a UNEP recognised regional centre of excellence for persistent organic pollutants.  The laboratory is accredited for mercury testing in water and foods and the atmospheric air mercury level monitoring will strengthen IAS’s capabilities in providing timely and reliable data for decision making in Fiji and the region.”