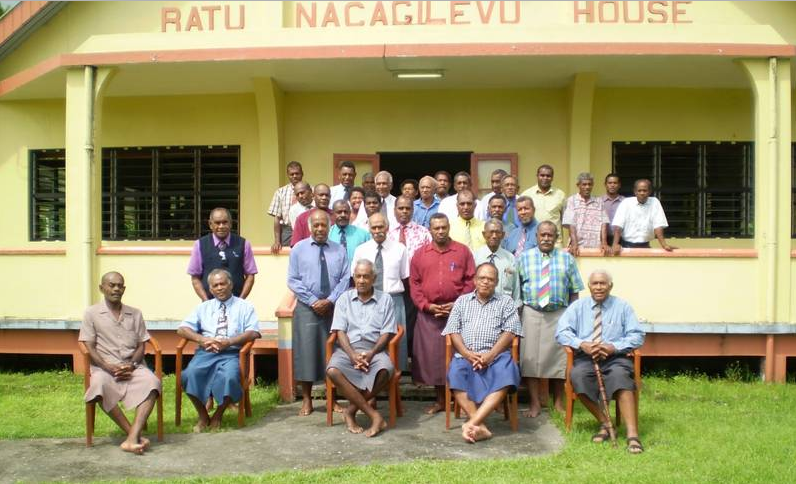 Chiefs and representatives of the Vanua of Kadavu

A leadership and management training workshop was held in Tavuki village in Kadavu from the 9th to the 11th of April, 2008. This is the first time in Fiji to have a leadership and management training specifically for traditional chiefs. This leadership and management workshop was organised collaboratively by the Institute of Applied Sciences, the Department of Indigenous Affairs (Fijian Affairs Board) and the Kadavu Yaubula Management Support Team (KYMST). The facilitators of the training workshop were from the above entities and a representative from International Union for Conservation of Nature (IUCN) accompanied the team and took on the role as one of the rapporteurs of the workshop. The USP Governance Programme (PIAS-DG) also assisted in the preparatory planning phase of this workshop. The target audiences were the traditional chiefs from the nine major districts (tikina) in Kadavu.

About 30 participants attended the workshop comprised of eight paramount chiefs from the nine major districts, five chiefs from the other major “vanua” (chiefdoms) and representatives from the district councils, women association and youth groups. According to one of the Fijian Affairs Board staff who was part of the facilitator’s team, they have been trying without much success to run such specific leadership training for traditional chiefs in Fiji since 1984.

The overall goal of the training workshop was to improve governance in the areas of leadership and management of village projects. The five primary objectives were:

Interestingly, one of the key issues stated by quite a significant number of the participants at the workshop was that such leadership and management training was indeed overdue given the current breakdown of the traditional chiefly and vanua leadership system in Kadavu as well as the whole of Fiji. In addition two of the district paramount chiefs stated that they attended this workshop so that they can find ways to be able to effectively resolve “vanua” issues and challenges that they experiencing due to modernisation infiltrating in their respective tikina that is immensely “negatively” affecting traditional lifestyle and norms. Hence, one of the most important outcomes of the workshop was the development of district action plans. The action plans primarily focused on how traditional chiefly leadership can be improved and adapted in today’s modern world and secondly how development and conservation initiatives can be managed effectively in order to improve the economic, social, spiritual and cultural well-being of the people of Kadavu.

Kadavu have been a leader in creating a local training team to develop resource management plans in all parts of Kadavu. There is also an ongoing initiative by which the Kadavu people will plan for sustainable development for tourism, infrastructure, etc. The workshop was planned to support such initiatives.

There are plans to conduct the similar leadership and management training at the district and village levels in Kadavu as well as to be applied in the other 13 provinces in Fiji.