Marine conservation in the Solomon Islands 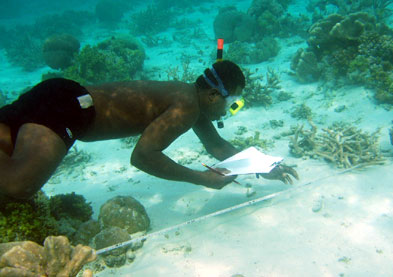 A diver checks out a transect laid to count important indicator species in protected areas.

The University of the South Pacific’s Institute of Applied Science has taken a leading role in helping communities in the Solomon Islands conserve their marine resources.

In the process, it has been able to form partnerships with the Solomon Islands Government and international non-government organisations (NGOs) to make this possible.

Out of this initiative has come the Solomon Islands Locally Managed Marine Areas Network (SILMMA) which recently held its second meeting in the Central Province of the Solomon Islands. Forty-three representatives from a diverse range group were in attendance, including the government and international NGOs. Majority of the participants in the four-day workshop were from various community groups who have been struggling to conserve their marine resources.

Mr Peter Ramohia of the Solomon Islands Department of Fisheries and Marine Resources said that government support locally managed marine areas.
“The government views our country’s marine resources as a sort of natural agriculture, and communities have a vital role to play in managing those resources. I hope that this workshop will strengthen abilities of communities, and will also offer an opportunity to share the valuable lessons learnt from the diverse projects already underway.”

SILMMA is the Solomon Islands’ regional network under an international association called the “LMMA Network,” which was started in 2000 in Suva, Fiji, with much involvement of the Director of IAS Professor Bill Aalbersberg, and has since spread throughout the Pacific. The LMMA works as a guiding body to assist rural communities in taking responsibility for the care of their marine resources. They offer community groups training in basic marine monitoring and in using the results of monitoring to make informed management decisions.

In 2001, Mr Alifereti Tawake, a Scientific Officer with IAS, visited the Solomon Islands from Fiji to introduce the concept of a locally managed marine areas network. Two years later the inaugural meeting of SILMMA was held. It brought together the Worldwide Fund for Nature Solomon Islands (WWF-SI), SIDT, ECANSI, the Department of Fisheries, World Fish Centre, the Tetepare Descendants’ Association (TDA), and the Roviana and VonaVona Resource Management and Development Project. This first meeting was largely an introduction to the LMMA Learning Framework, which is a tool the network uses to assist communities in marine resource management planning.
SILMMA’s recent meeting offered a review of the information covered in the first meeting, as well as some practical training in marine monitoring and data collection. The meeting was facilitated by Mr Silverio Wale, of the Foundation for the Peoples of the South Pacific, who also works as the local coordinator for SILMMA, and by Mr Tawake.

Mr. Tawake was very pleased to see that many new groups had become involved since the first SILMMA meeting. He stressed the importance of looking after marine resources, saying coastal fisheries were the backbone of many communities in the South Pacific.

“More than 80 per cent of the population of this region live along the coast and depend on marine resources. However, in many areas, marine resources are being poorly managed and are being severely over-harvested,” said Mr Tawake.

“LMMA is a strategy that advocates active participation of communities and other local stakeholders in developing, implementing and evaluating marine area management plans through adaptive management approaches. By adopting properly developed management plans, communities can help ensure that their precious marine resources will last and will continue to provide both food and important financial benefits into the future.”

The workshop offered an opportunity for participants to share their community’s experiences and aspirations about marine resource management. It also covered various simple ways that a community can monitor and evaluate the success of their tambu (taboo) area. This included a practical session in the water at the Maravaghi Marine Protected Area, where teams of monitors learned to lay transects to count important indicator species, such as groupers and parrotfish, as well as to estimate coral cover and to count other economically important species such as trochus and beche-de-mer. Mr. Tawake, Peter Ramohia, and Dr. Chris Ramofafia of the World Fish Centre helped to instruct the group in basic monitoring techniques.
Participants learned that tambu (taboo) areas such as the Maravaghi Marine Protected Area can have what is called a “spill-over effect.” This is when marine creatures are permitted to reproduce and grow to maturity in a protected area. Their offsprings will then begin to migrate to nearby areas of reef in greater numbers, where they may be harvested by resource owners.
Workshop participants also learned about the life cycles of some of the important marine resources. This included information on the marine creature trochus which must reach a certain size before they can begin to reproduce. Participants were told that if some trochus did not have a safe area to reach maturity, the local population could very easily be over-harvested and eventually disappear.

“Most people are aware that this has already happened to the green snail throughout the Solomon Islands, and it could very easily happen to other species if we are not careful,” said Mr Tawake.

This workshop was hosted by the locally-owned Maravaghi resort, where the meeting hall overlooks an MPA filled with a dazzling array of fish. The workshop included community groups and individuals from Choiseul, Isabel, Malaita, Western Province, Guadalcanal, Central Province, and Ontong Java, supported by organisations such as WWF-SI, FSPISI, The Nature Conservancy, and the International Waters Program. Also attending were representatives from established projects such as the TDA, Roviana and VonaVona, and the Arnavon Islands Conservation Area, along with interested parties from The World Fish Centre (formerly ICLARM) and Dive Gizo.