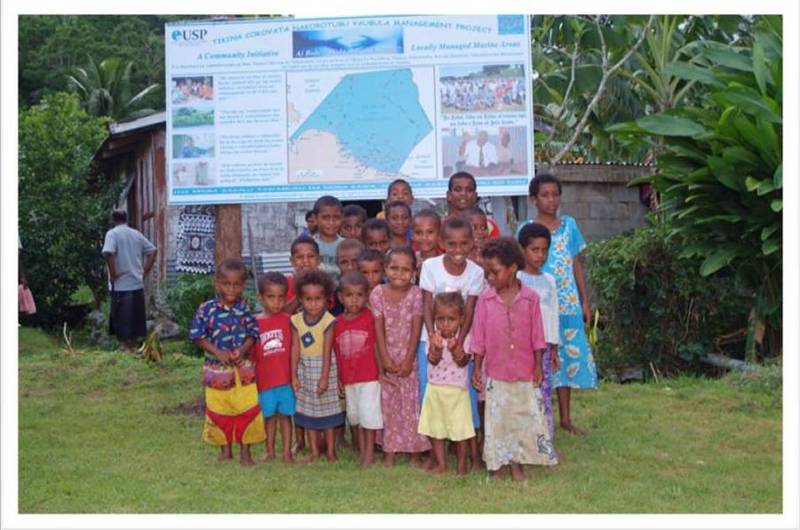 Children (the future) of Nakorotubu

One of Fiji’s largest district has declared 10 coral reefs as Marine Protected Areas (MPA). The Tikina Nakorotubu in the Ra Province has taken this step in realization of the increasing pressure on its qoliqoli (fishing grounds) not only from outsiders but from its population that is increasing in both size and daily demand.

The declaration was made at Verevere Village recently by the Bose Vanua Nakorotubu which provided the impetus for this conservation effort after numerous discussions at village, district and provincial level which took two years from 2005. The Bose Vanua Cokovata Nakorotubu, a traditional body consisting of 24 Turaga ni Yavusa (chiefs) from five sub-districts of Bure, Kavula, Nakorotubu, Navitilevu and Nakuilava.

The project was officially launched by Mr Joe Murphy of the American Embassy in Suva and was witnessed by over 200 people from 25 villages across one of Fiji’s largest tikina(district).

“It is encouraging to witness the mobilization of a huge community who have realized the importance of conserving their resources for sustainable use and I congratulate you for taking this step not for someone else by for you and your future kinsmen,” said Mr Murphy.

Mosese Ratu the Mata ni Tikina (district representative) of Nakorotubu explained that the idea came about after hearing stories over the radio and in newspapers of marine conservation work in Verata in Tailevu and Kadavu and how qoliqoli owners have started fishing close to home rather than spending a lot to reach reefs and far way places.

He said in 2005 the Ra Provincial Council meeting invited a representative from the Institute of Applied Science (IAS) from the University of the South Pacific in Suva to explain to the chiefs of Ra the idea behind marine conservation. It was left to individual villages whether to take on the idea or not.

Mosese approached the Turaga ni Koro (viilage mayor) within his sub-district pushing for the idea to be implemented as their villages were the once close to sea and saw the immediate need to start conserving resources.

“In 2005 we held our first workshop at Namarai where we wanted the IAS people to explain to us the villagers why we need to do this and what good it would bring and we found out that this is not a plan for us living today but planning for the next 50 years or so,” he explained.

Tikina Nakorotubu covers an area approximately 513 sqkm. From a coastal view, it spans from Namatadamu village in Bureivanua which is two hours from Korovou Town in wet Tailevu to Nayavuira Village which is about 4 hours away from sugar cane town of Vaileka (Rakiraki). Its interior villages include Bucalevu a kilometer away from the Nayavu Goverbnment Station in rainy Wainibuka.

With 25 villages cumulatively over 2000 people, the qoliqoli of  Nakorotubu is believed to be one of Fiji’s highly used. Its high usage volume is attributed to its location.

Located within the Bligh Waters, it is a sea passage for container ships, inter-island ferries and the numerous fishing boats and village punts that crisscross on voyages from Viti Levu and Vanua Levu which can be fingered to number over 1000 annually. This is compounded by the location of Vatu-i-ra Passage on of Fiji’s busiest sea passage, which lies within the Nakorotubu qoliqoli.

“This declaration is interesting because it is made by chiefs who are uses of the sea and those whose vanua are located beside the Wainibuka River in the highlands who know nothing about coral reefs. It is moving to see people from the interior mingle and discuss marine conservation with their kinsman from the coast and to realize it is not about a certain group of people in the tikina but all the people of Nakorotubu,” said Alivereti Bogiva, from IAS who assisted in this work.

Marine Protected Areas are community planned and enforced and the Institute of Applied Science as part of the Fiji Locally managed Marine Areas (FLMMA) Network, has managed to assist 165 villages across Fiji in taking the first step to protect their source of livelihood and not waiting for government. This is born out of the realization that as immediate owners of the qoliqoli by usage right, no one from the outside would be bothered to protect their food source but qoliqoli owners themselves.

A biological study of two reefs in Nakorotubu in 2006, found that coral life seemed healthy but fish stocks were average. This result was presented at the Nakorotubu Youth Rally held at Namarai last year with the belief that youths were the ideal force behind marine conservation since they account for over 40% of marine resource users in the district.

“It is important to give people relevant information about their livelihood in relation to the future and for them to make a decision based on these pieces of information other wise you’d be forcing the horse to take a drink,” said Mr Bogiva.

With government finances stretched and rural development initiatives lacking, the people of Nakorotubu have taken this step to first consolidate their resources before implementing development plans.

“A crucial component of this work is research to find out not only the biological but later the economic value of the resources we have started with today hopefully when we know the value of the reefs and marine life then we can appreciate it more rather than using it senselessly,” said Alifereti Tawake, a marine biologist with the Institute of Applied Science.

Mr Tawake clarified that FLMMA is a network of government departments, non-government organizations and learning institutions. The Ministry of Fisheries is currently the coordinator and this position is currently based at the Fisheries Department Office in Draunibota in Lami.

“This is not an isolated effort as it not only involves the university but a number organizations spread across from government, NGOs and tertiary institutions and we all try to motivate communities to create hope and the drive towards a sustainable future,” he said.