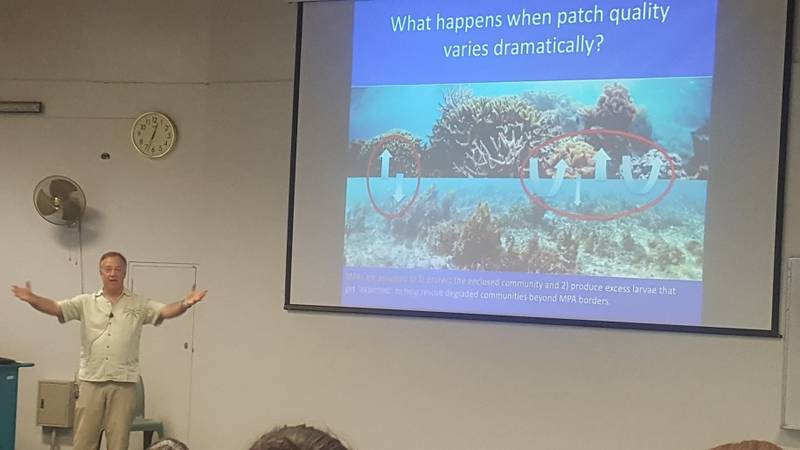 Healthy and successful small Marine Protected Areas (MPAs) that harbour healthy coral assemblages become attractive to large coral consumers that could threaten MPA stability and contribute to the dramatic global decline in coral reefs.  These were part of the findings that were presented in a seminar organized by the USP Research Office and the Institute of Applied Sciences (IAS) on 2 July 2018 at the USP Lower Campus Lecture Theatre.  The presenters Professor Mark Hay, the Teasley and Regents Professor at the School of Biology and Aquatic Chemical Ecology Centre at Georgia Institute of Technology (GIT), Atlanta, USA and his Postdoctoral Fellow Dr Cody Clements have been conducting research in Fiji for the past 14 years.  The seminar was also held in memory of the late Professor Bill Aalbersberg, the former Director of IAS who is fondly remembered as the founding father of the Locally Managed Marine Areas (FLMMA) and who had supported the collaborative research done between IAS and GIT for over 14 years.

Audience members comprising the Fiji Government officials, Fiji LMMA, USP academics, technical staff, researchers and students learned that the Pacific has a recorded 50% loss of coral reefs from the 1980s to 2000 period and another 50% loss in some areas during the 2016 bleaching event. It was also shared that between the 1980s to 2000, there were four good reefs providing juvenile fish and corals to save one degraded reef but post 2003, there is now only one good reef to save six degraded reefs.

The research strongly suggested that it is critical that proper management of MPAs is conducted to avoid critical “tipping points” from healthy to degraded reefs.  The research findings also included the following:

The presenters added that in light of the conservation and establishment of MPAs in Fiji and the region, reviewing the management of the MPAs and manipulating certain species to achieve desired effects can increase reef resilience.

Dr Katy Soapi, the Manager for the Pacific Natural Products Research Centre at IAS, in thanking the presenters stated that these types of collaborative research findings provide crucial evidence for policy and decision makers to take actions to ensure the health of MPAs and also that these findings are relayed to the locals and custodians of the MPAs.