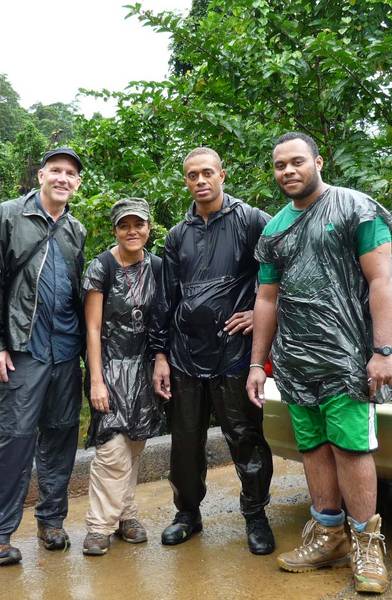 A new plant belonging to the non-vascular group of bryophyte plants was recently discovered in the lowlands of Viti Levu – Fiji’s largest island.

The genus called Cephaloziella has never been previously recorded in Fiji. A plant in this genus was found growing on the lower trunk of a tree fern in the Vago Reserve near Colo-i-Suva in the Naitasiri Province.

Cephaloziella belongs to the family Cephaloziellaceae which is a group of very small, thread-like liverwort plants.

The discovery of the Cephaloziella liverwort was made by the Institute of Applied Science (IAS) at the University of the South Pacific by the Institute’s graduate student researcher Mereia Katafono, and field assistants Manoa Maiwaqa and Saula Mule.

The plant was found while conducting field work for Mereia’s Masters of Science research project on tree trunk-inhabiting bryophytes, a study which is a first of its kind in Fiji and in the region. The plant specimen was then identified by bryologists and external collaborators of the project, Dr. Matt Renner of the National Herbarium of New South Wales, Sydney, Australia and Dr. Matt von Konrat of the Field Museum of Natural History, Chicago, USA.

Liverworts are one of the three groups of bryophytes which are said to be the earliest green plants to move to land. Very little is known of this group of plants despite their great biological, ecological and evolutionary significance. They play an important role in ecosystem processes such as prevention of soil erosion, nutrient cycling, and forest hydrology. They may also contribute, as much as vascular plants, to species richness in many forests and can form a significant proportion of the total biomass of some plant communities.

Liverworts are also very sensitive to ecological and environmental changes, including anthropogenic disturbances. This has led to increased research in using bryophytes as indicators of long-term climate change and forest health hence supporting their usefulness in the field of conservation science.

However, he added, that researchers are still determining if the plant represents a new species to science or if it is similar to a species known from New Zealand.

This new finding, according to Mr Tuiwawa, is another step forward in an effort to fill information gaps relating to Pacific bryophyte flora and in developing and strengthening bryophyte research in Fiji.