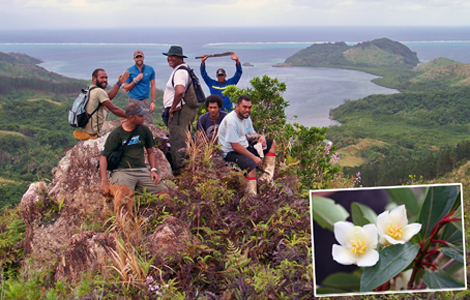 A new flowering plant belonging to the Medinilla species, similar to that of the famous Tagimoucia flower, has been recently discovered on the island of Kadavu in Fiji.

The plant was found on the edge of a remnant primary forest during a biodiversity assessment of forests in Nakasaleka district, Kadavu by scientists at the Institute of Applied Sciences (IAS) of the University of the South Pacific working under the IUCN – Water and Nature Initiative project.

Taxonomic work is currently underway to get a proper name of the plant and in the meantime a temporary name has been given for the plant. It is called Medinilla Matasawalevu, illustrating the location where it was discovered.

Mr Marika Tuiwawa, Curator of the South Pacific Regional Herbarium and lead scientist and botanist on this particular expedition, highlighted that discovering new things was part of their everyday work at IAS.

Commenting on the discovery, Mr Tuiwawa revealed that it was an “opportunistic find”. This is despite the fact that there have been many research done since the University came into existence, there are still many species out there that nobody knows about which is yet to be discovered and identified.

“We were actually on our way down to the village of Matasawalevu, after seven hours of hiking, where we were going to spend the night. We were looking around where we were walking and saw this cluster of white flowers in a tree growing at the edge of the grassland. Upon closer examination, I realised that I was looking at a flower that I had not seen anywhere else in Fiji. Yes, it is definitely a new record for Fiji” he said.

There are about 400 known species of Medinilla around the world and of that, 11 can only be found in Fiji.

The major threat to the new species is the disappearing of its habitat, Mr Tuiwawa said. The only reason the plant has been discovered is because it is growing at the edge of where the burning of a traditional road, which links two villages, continually takes place to keep the route accessible.

Water and Wetlands Coordinator at IUCN’s Oceania Regional Office, Dr Milika Sobey said that the discovery of this previously unknown species of plant gives us a sense of just how fragile nature can be.

The Global Director of IUCN’s Biodiversity Conservation Group, Ms Jane Smart further noted that the fact that only one plant of this kind was found so far and that it occurs in such a vulnerable place should set alarm bells ringing.

The challenge now is to protect the new species and raise awareness of its importance among local communities, to secure its long term future, Ms Smart stated.

Mr Tuiwawa pointed that there was a serious lack of knowledge on the plant within the local community which is why IAS is planning to carry community awareness about the plant.

“I am glad IUCN is willing to provide some funds for community awareness and at the same time enable an assessment to find out if there are other plants of the same type around the vicinity,” he added.

Mr Tuiwawa further added that USP plays a very important role in training scientists (taxonomist) within the Pacific region who now have the skills and experience to recognise unique organisms around them.