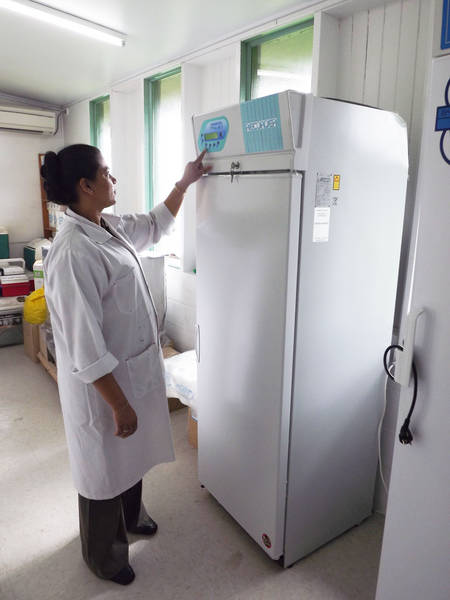 A representative of the SFP (Strengthening Fisheries Products) program of the European Union Mr Paul Nichols visited the IAS Microbiology Laboratory on Thursday 14th June, 2012 to evaluate the effectiveness of the assistance given to the Institute.

Over the last three years, particularly 2009, technical experts supported by the program made visits to the Institute to provide training and technical support to improve the capabilities of the laboratory especially for microbiological tests that are required by the European Union for fish export. On top of this, the laboratory through the Ministry of Health received equipment such as a pH meter, oven, water de-ionizer and refrigerators to help boost its equipment base.

As a result of the training and technical advice provided for by the SFP program, the IAS microbiology laboratory achieved international accreditation under ISO17025 for core analyses in 2009 and has been able to expand on its scope since then. Equipment received is either being used or kept as backup.

Mr Nichols expressed his satisfaction on the utilization of their support to IAS. He did mention that a number of countries in the ACP block that received similar support had equipment that was not utilized at all. He added that there will be further rounds of assistance to be made and IAS is now well placed to receive further assistance from them.

This will be especially true as the Economic Partnership Agreement with the EU and the Pacific states is being developed and that could greatly expand the scope of trade. Like tuna, other products will need to meet health and safety standards.

The IAS laboratory has been identified as a possible regional testing laboratory and a team from the EU will visit later in the year to do a feasibility study.