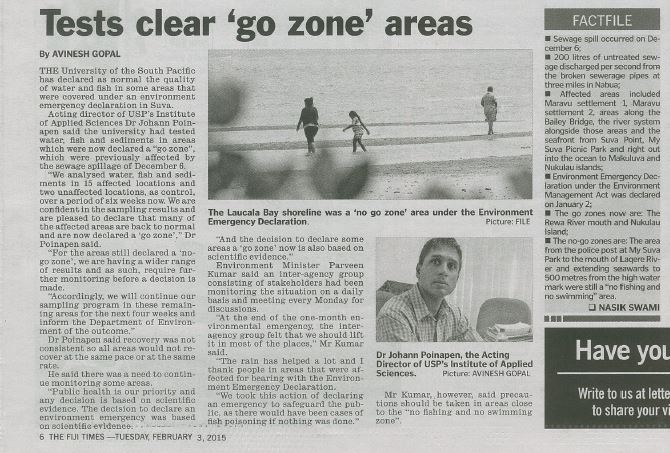 THE University of the South Pacific has declared as normal the quality of water and fish in some areas that were covered under an environment emergency declaration in Suva.

Acting director of USP’s Institute of Applied Sciences Dr Johann Poinapen said the university had tested water, fish and sediments in areas which were now declared a “go zone”, which were previously affected by the sewage spillage of December 6.

“We analysed water, fish and sediments in 15 affected locations and two unaffected locations, as control, over a period of six weeks now. We are confident in the sampling results and are pleased to declare that many of the affected areas are back to normal and are now declared a ‘go zone’,” Dr Poinapen said.

“For the areas still declared a ‘no-go zone’, we are having a wider range of results and as such, require further monitoring before a decision is made.

“Accordingly, we will continue our sampling program in these remaining areas for the next four weeks and inform the Department of Environment of the outcome.”

Dr Poinapen said recovery was not consistent so all areas would not recover at the same pace or at the same rate.

He said there was a need to continue monitoring some areas.

“And the decision to declare some areas a ‘go zone’ now is also based on scientific evidence.”

Environment Minister Parveen Kumar said an inter-agency group consisting of stakeholders had been monitoring the situation on a daily basis and meeting every Monday for discussions.

“At the end of the one-month environmental emergency, the inter-agency group felt that we should lift it in most of the places,” Mr Kumar said.

“The rain has helped a lot and I thank people in areas that were affected for bearing with the Environment Emergency Declaration.

“We took this action of declaring an emergency to safeguard the public, as there would have been cases of fish poisoning if nothing was done.”

Mr Kumar, however, said precautions should be taken in areas close to the “no fishing and no swimming zone”.

Reference: This article was taken from The Fiji Times dated Tuesday the 15th of February, 2015.