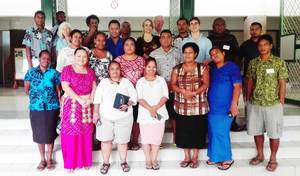 The Institute of Applied Sciences (IAS) hosted two Global Project Training workshops on regional support for the monitoring of Persistent Organic Pollutants (POPs).  Held from the 4-8 April 2016, the workshops were jointly funded by the United Nations Environment Program (UNEP) and Global Environment Facility (GEF).  Participants of the workshops were from 9 regional countries.

Held back-to-back, the training workshops were an outcome of the multilateral environmental agreement, the Stockholm Convention, which aims to lower the global levels of POPs.  The Convention also requires that the effectiveness of measures to control POPs must be regularly evaluated.

From 2007 to 2011, a global monitoring plan (GMP) was developed and a first round of regional analyses performed by IAS in collaboration with UNEP and Pacific Island Countries. A data warehouse was launched to share these results. After successfully carrying out the first regional monitoring of POP levels in the region, IAS has developed expertise in this field and its accredited laboratory is recognised as a regional reference laboratory in the analysis of the POPs chemical pesticides and polychlorinated biphenyls.

The first workshop was on the Updating of the National Implementation Plans for POPs for the 9 regional countries.  The second workshop was the Inception meeting on the Second Round of the UNEP/GEF project on ´Continuing Regional Support for the POPs Global Monitoring Plan under the Stockholm Convention´ in the Pacific Region.   Under the second round of the project (also called GMP2) starting soon, the IAS laboratory will develop expertise in the analysis of newly-designated POPs such as brominated flame retardants. IAS will also be called to provide regional training and support to the Pacific Island Countries in implementing the GMP2 for POPs according to the Stockholm Convention on  the effectiveness evaluation, by generating data on the concentrations of POPs in the core media human milk, air and water.

The Acting Director, IAS, Dr Johann Poinapen while acknowledging the guidance of the UNEP/GEF Trainers, said that IAS will continue to provide quality training and technical services to the regional governments in the monitoring and management of POPs in regional environments. He also mentioned that the development of a sustainable monitoring plan for POPs in the Pacific Region is critical if we were to succeed in identifying changes of POPs’ concentration with time and assess POPs’ regional and global transport.