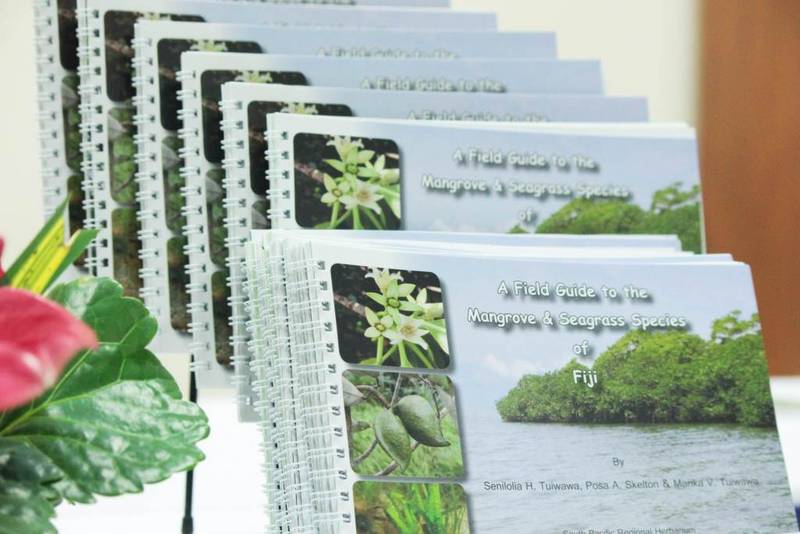 A Field Guide to the Mangrove Seagrass Species of Fiji

With pedagogy, student support, and research being priority areas for the University of the South Pacific, as outlined in the Strategic Plan 2013-2018, scientists at the Institute of Applied Sciences (IAS) have contributed to the positive development of the University in these areas, by producing the first guide to identifying mangrove and seagrass species in Fiji.

The guidebook, A Field Guide to the Mangrove and Seagrass Species of Fiji, was launched by the Permanent Secretary for the Ministry of Lands, Mr Tevita Boseiwaqa and the Director of Environment, Mr Jope Davetanivalu, at the International Union for Conservation of Nature (IUCN) Oceania Office in Suva, on Tuesday, 9 July, 2013.

The book is an important contribution, not only to the University, but also to the members of the public seeking information on mangrove and sea grass issues both in Fiji and the rest of the Pacific region.

The IUCN-Oceania was pleased to launch the book as it was a demonstration of a successful collaboration of several of the local environment organisations including the Fiji Department of Environment and the Institute of Applied Sciences.

Written by Ms Senilolia Tuiwawa based at IAS, Network Coordinator at South Pacific Regional Environment Programme (SPREP) and former staff of IAS, Mr Posa Skelton and the South Pacific Herbarium curator, Mr Marika Tuiwawa, the field guide is a contribution to research and conservation, specifically designed for the non-technical sectors in Fiji.

These sectors include organisations that may not have the technical support to identify mangrove and seagrass species found throughout Fiji’s archipelago.

The guide will also serve as an important reference guide for neighbouring countries, to help identify the different species of mangroves and seagrasses that may be similar to Fiji’s.

Mr Tuiwawa said, “The field guide will be an important tool for the laymen raising awareness and enhancing the conservation of mangrove and seagrass species within Fiji and the region”.

With the significance of mangroves and sea grass as a habitat for many marine species and a safe nursery for many more species often underappreciated, the book aims to draw attention to the key conservational aspects of the natural marine ecosystem.

Written in language that is comprehensive to members of the public, the 75 page guide features photographs and information such as the local names, uses and distribution, of the 12 mangrove and six seagrass species in Fiji.