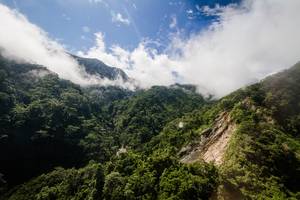 The mountainous terrain around the Valevahalo basecamp. ©Milan Janda

In October 2015, team of biologists from around the world made a major expedition to the interior of Guadalcanal in the Solomon Islands, to document the unique and diverse flora and fauna of this biodiversity hotspot. The expedition was coordinated and led by a team of Fiji scientists from the Institute of Applied Sciences (IAS) of The University of the South Pacific (USP), in partnership with the American Museum of Natural History (AMNH), the Solomon Islands Community Conservation Partnership (SICCP) and the Solomon Islands government. Funding for the expedition was provided by a grant from the Critical Ecosystem Partnership Fund (CEPF), with additional funding from the USP Research Office.

The expedition was a historic one as it was one of the largest biological expeditions ever conducted in the Pacific Islands. It comprised 54 people from 12 different countries. The expedition was carried out in partnership with the Uluna-Sutahuri landowning tribe, 20 members of which joined the expedition in the capacity as guides, and to assist with documenting the historical and cultural aspects of the area.

The scientific team was multidisciplinary, comprising 34 scientists across 7 main taxonomic groups: plants, mammals, birds, insects, fish, reptiles and amphibians. Amongst the plant scientists, there were specialists in orchids, ferns and mosses as well as those who were generalist botanists.

The high-altitude montane region of Guadalcanal, encompassing an area of over 3700km2, is an area of great conservation significance in the Pacific. CEPF lists this area as a Priority 1 (highest priority) site for conservation efforts in the East Melanesian Islands biodiversity hotspot. The rainforests of the Solomon Islands in general are listed on WWF’s Global 200 ecoregions of conservation priority, and categorised both as ‘Outstanding’ and as ‘Vulnerable’ (this vulnerability being primarily due to logging and the negative impacts associated with invasive species).

Guadalcanal’s highest mountain, Mt Popomanaseu, stands at 2310m above sea level, and is the highest point in the Pacific between PNG and South America. In terms of land area Guadalcanal is only half the size of Viti Levu, Fiji, but its highest mountain is more than twice as high as Mt Tomanivi in Viti Levu. Speaking at the post-expedition press conference in Honiara on September 23rd, expedition member Chris Filardi, an ornithologist at the American Museum of Natural History, explained the importance of studying islands like Guadalcanal that have such rapid changes in elevation.

“These islands in the sky are home to unique plants and animals of global significance. The mountain ranges are remote yet thriving ecosystems that provide a wealth of services such as fresh water and natural climate control. Additionally, these areas are often the sacred hearts of the islands they rise above – they are the birthplace of ‘kastom’ and language,” he said.

The Uluna-Sutahuri tribal people are the traditional dwellers and users of the area where the expedition was carried out, known as Bobosogo, in the Tetena Haiaja mountain range. Aside from the scientific value of the expedition another objective was to strengthen the Uluna-Sutahuri tribe’s customary relationships with Bobosogo and Tetena-Haiaja as sacred places of origin and cultural power and practice.

Similarly to many areas in the Solomon Islands, the Uluna-Sutahuri people left their traditional dwelling areas in the central mountain ranges decades ago as they sought better education and other social services in the lowland areas around Honiara. For the tribal elders who joined the expedition, this was an opportunity for them to revisit their homeland which they had not seen for many years.

Noelyne Biliki, who represented the Uluna-Sutahuri on the Expedition Planning Team, and who joined the expedition in the capacity of cultural liaison, reminisced about her childhood spent in these mountains. She and her family moved to the lowlands when she was in her early teens.

“This expedition has been carried out in line with our tribe’s vision for the future of our land. It has been a memorable experience for all of us, in particular for our elders, who were able to return to the land where they grew up and reconnect again with it. And for our young people who joined the expedition, it was the first time for them to visit their land, and to experience the abundance of the plant and animal life in this forest environment,” she said.

Speaking at the press conference in Honiara after the expedition, Dr Sarah Pene highlighted the important contributions made by Solomon Islands alumni of USP to the success of the expedition, in particular Dr Patrick Pikacha, David Boseto and Edgar Pollard.

“Since graduating from USP they have gone on to further study and work opportunities both here and overseas in Australia and the United States, but their commitment and passion for conservation work in the Solomon Islands has been paramount. These three young men have played a major role in getting this expedition off the ground, and were instrumental in fostering networking and mentoring relationships between the international scientists and the new generation of young Solomon Islands scientists that joined us in the field,” she said.

“They are the future of Solomon Islands conservation work, and based on the passion, commitment and sheer capacity for hard work that they displayed during the expedition, the future looks very bright indeed,” Sarah Pene said.

The Solomon Islands Protected Areas Act of 2010 established the legal framework within which areas of biodiversity significance can be protected. However, effective decision-making in terms of conservation strategies for the proposed project area needs to be based on comprehensive biodiversity assessments and the resulting species checklists and distribution data. Expeditions and surveys such as the one carried out last month provide this information to decision-makers and help guide conservation policy.

At last week’s press conference in Honiara, the expedition team presented some of the highlights of the expedition. In attendance was the Deputy Prime Minister, Hon. Douglas Ete – who pledged his government’s support for the creation of a legally protected area of conservation in the expedition site.

The flora team, led by Myknee Sirikolo, Director of the Solomon Islands Herbarium, made some exciting discoveries of new species of orchids, as well as recording many species of plants that have never been recorded on the island of Guadalcanal before. A large proportion of the Solomon Islands flora is endemic, meaning that these species are not found anywhere else in the world.  The expedition enabled the collection and documentation of hundreds of plant species, to ensure that this unique flora can be studied by scientists across the world and expand our knowledge of their distribution, ecology and biogeographical history.

Alifereti Naikatini of USP worked with Tyrone Lavery of the University of Queensland on the mammal survey, focusing in particular on native bats and rats. Nine species of bats were collected and documented during this expedition. Bats are important to forest ecosystems because they help to pollinate many species of plants, and also assist in dispersing their fruits and seeds.

Two frog species in the genus Platymantis were collected, which are thought to be never-before documented by scientists. The herpetofauna team also made important observations of many species ecology and reproductive biology during the survey.

Milan Janda, of the University of Guanajuato, Mexico joined the expedition to study the ant diversity. He found approximately 90 species of ants in the 10 days that he was in the field, and some of these are most probably new species to science. Another interesting finding he made was that some species of ants have a different behaviour in Guadalcanal compared to the same species that is found in other parts of the Pacific, or in other parts of the world.