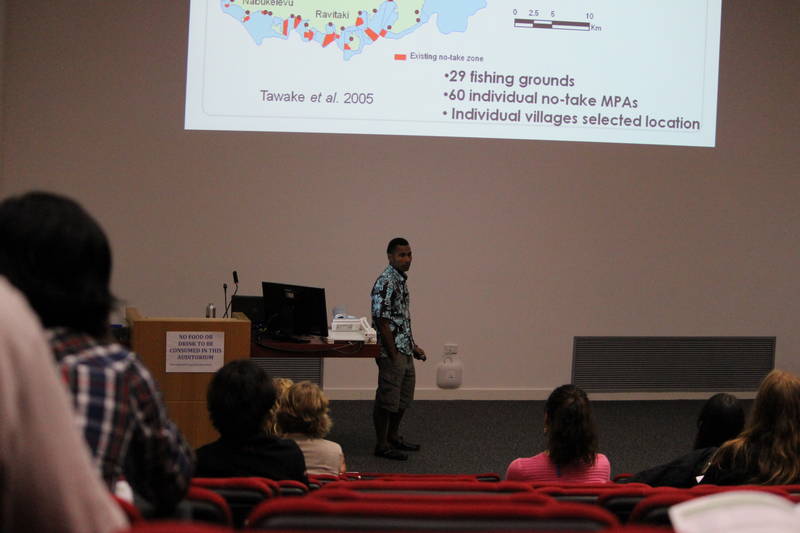 The Student Conference on Conservation Science (SCCS) held in Brisbane, Australia, 21 – 31 January 2013 awarded the prize for the 3rd best talk  to USP’s Institute of Applied Science Masters student, Mr. Hans Wendt. This was out of 36 international postgraduate presenters.  Mr. Wendt presented on his masters research titled “Applying spatial planning tools to strengthen the design of a community-based network of no-take Marine Protected Areas in Kadavu, Fiji”. The research was supervised by Mr James Comley.  The conference was attended by over 125 postgraduate students from more than 20 different countries around the world.

The SCCS Australia is one of the programs aimed at strengthening the careers of young conservation scientists around the world through events in Brisbane, Bangalore, Cambridge and New York. It was designed for students pursuing postgraduate studies within the field of conservation science. The program is designed to help launch their careers in conservation science through a combined 3 days conference, 3 days of field trips and sightseeing around Brisbane, and 4 days of training and workshops. According to Mr. Hans Wendt, the conference has provided him with the opportunity to present his research, share ideas, make new friends and at the same time learn from the different studies conducted by other students from the south-east and east Asia, Australasia and the Pacific, which is the most biologically diverse region in the world.

In congratulating Mr Wendt, the Director, IAS, Professor Bill Aalbersberg stated that the award was a reflection of the quality of scientific research and the caliber of graduate researchers that the IAS, USP and the region is producing which directly contributes to the USP’s pursue of research excellence.