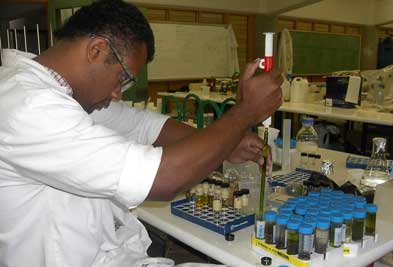 Viliame Momoivalu of the Institute of Applied Sciences assists in research work being carried out to look for medicinal values in marine organisms such as sponges and soft coral.

The Institute of Applied Science at the University of the South Pacific together with the Georgia Institute of Technology and Scripps Institute of Oceanography have combined their research efforts in Fiji to look for medicinal values in marine organisms such as sponges and soft coral.

One of the goals of this program in collaboration with Scripps is to discover small molecule drug leads from chemically prolific marine bacteria cultured from sediment samples collected around the islands of Fiji.

Actinomycetales is an order of bacteria and this order is known to make more than two thirds of bio-active compounds and structurally diverse chemical compounds.

Mr Ritesh Raju, assistant project manager at the Institute of Applied Science (IAS), says marine actinomycetes represent an unexplored yet significant new resource for drug discovery and cataloguing the diversity of these bacteria and their ability to produce useful new medicines is a fundamental goal.

Mr Raju is part of the research team that consists of Julia Kubanek and Professor Mark Hay, a biology expert, who are from the Georgia Institute of Technology and Paul Jensen a research microbiologist from Scripps. Their findings were presented in a public lecture at USP recently.

“During the pilot study of this research, we got four new compounds from one of our strains we isolated here in Fiji, from the off-shore sediments’’ said Mr Raju.

He added that the four compounds are all analogs that belong to the terpenoid chloro- dihydroquinones having antibiotic properties.

“We are trying to get new strains and new species, which probably will be able to make new compounds.”

Mr Raju says the new find will need to go through many processes and clinical trials before it can be classified as a safe drug. He added that they are interested in finding new drugs from marine microbes.

IAS director Professor Bill Aalbersberg says they need to find drugs that are better than the current drugs used.

“We are testing for things that are resistant and are known as antibiotics and this would be a new way to treat the resistant strains,’’ said Professor Aalbersberg.

The collaboration between the three institutions started in January this year and is an on-going one.